Success from BOA begins work for next events 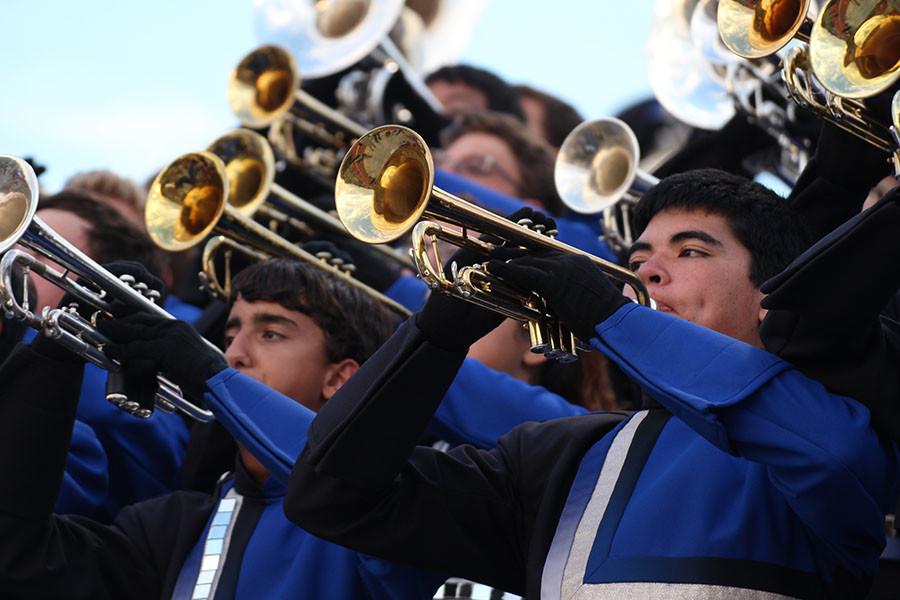 Band members play their instruments in the stands. March-a-thon will be this weekend at Bible Stadium.

Every year the band practices in the parking lot after school but this year they aren’t the only ones. A group of 10 girls from Lion Heart choir performs with the band every halftime show, practices with them, and even went with them to BOA.

“Everyone is giving 110% all the time,” senior Sarah Yeager said. “The community, the family, the way everybody treats each other. They’re the best of friends even if there is drama they’ll take care of it and I like how close knit everybody is.”

“You’re constantly focusing on how to work with others and blend with others,” Yeager said. “It’s not just about notes, it’s about how the music makes you feel. It’s about how you perform with others and it’s about trying to better yourself. It’s like bringing attention to how hard each individual works. It’s definitely brought us together and brought an understanding of each other.”

On Wednesdays and Thursdays the choral works girls practice with the band for a total of around six hours a week. The students are all expected to go home and practice on their own time, all 300 of them. The group goes with the band to every Friday night football game and performs with them at halftime.

“Just the amount of time and effort that everyone involved puts into it,” choir director Mr. Wiley said. “I mean I’m talking about all the way from the end of July to now. The amount of effort and stick-with-it-ness and grit that everybody involved has is just absolutely phenomenal and inspiring.”

The halftime shows include many different elements of the fine arts. Painted props, costumes, flags and more go into the show.

After winning Bands of America Regional Contest last weekend for the first time since 1994, some students were surprised by what Band Director Mr. Selaiden had to say.

“In choir we talked about what Mr. Selaiden said to the kids after they won BOA and he basically said that this trophy means nothing,” Wiley said. “He said that this trophy is just a representation of the hard work that is needed to get one of these things. So that was just really inspiring. For me as a choir director with this choir program that’s just starting to get off the ground, knowing that if you just continue to work hard we can kinda realize some of the same success as they had.”

March-a-thon will be this Saturday at 7:00 p.m. It will be held on the field of Bible Stadium where Choral works will be performing.

“Band kids have been so awesome to incorporate the choir girls,” Wiley said. “It was just one of those things cause the band is their own entity in the school so I was a little worried about them being a part of the family but the band has just welcomed them in and the band staff has welcomed myself and Ms. Williams in. Everyone’s just working towards a common goal.”