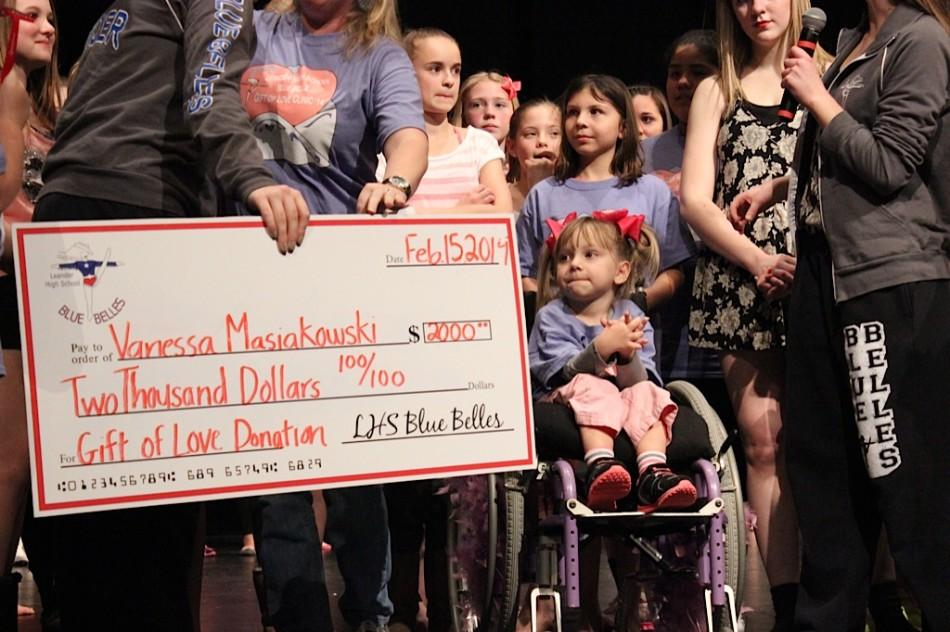 Out in the world there are so many children who don’t have the ability to run around and play. Maybe it’s impossible to help them all, but the Blues Belles raised over $2000 for four year old GiGi Masiakowski who has Spinal Muscular Atrophy.
GiGi’s mother Vanessa Masiakowski is a third grade teacher at C.C. Mason. Every year the Blue Belles hold the Gift of Love Clinic to raise money for Leander ISD families in need. GiGi was selected to receive the money to this year because of her genetic disorder, Spinal Muscular Atrophy, which prevents her from being able to walk. With her disorder comes lots of expenses, so the money the Blue Belles raised will help with her medical expenses.
“The money donated is being used to purchase a powerchair (motorized wheelchair) for GiGi. Her muscles are weak, so she can only use her pushchair for short distances,” Masiakowski said. “A power chair will enable her to have more mobility and independence.”
When GiGi was little her parents had the option to carry her everywhere, but now that she’s growing, it isn’t as easy.
“GiGi’s chair helps her access her world,” Masiakowski said. “GiGi is able to crawl, but that is not an option for when we are in public. The chair gives her the opportunity to experience activities that her brother and sister experience.”
During the closing of the clinic the Blue Belles gave GiGi a check and she came out in her wheelchair. The experience was very touching for some of the Blue Belles.
“I felt like I was a part of something much bigger than just a dance team, or just a dance clinic,” junior Head Company Leader Juli Todd said. “We were really helping someone, and really making their life better.”
Now that GiGi has the money for a powerchair, she can live more like her peers who do not face challenges brought on by medical conditions.
“We like to make her life as “normal” as possible, so we go to parks, the movies, and nature trails,” Masiakowski said. “GiGi needs support wherever we go, but she also gets to experience independence- just like any other four year old.”