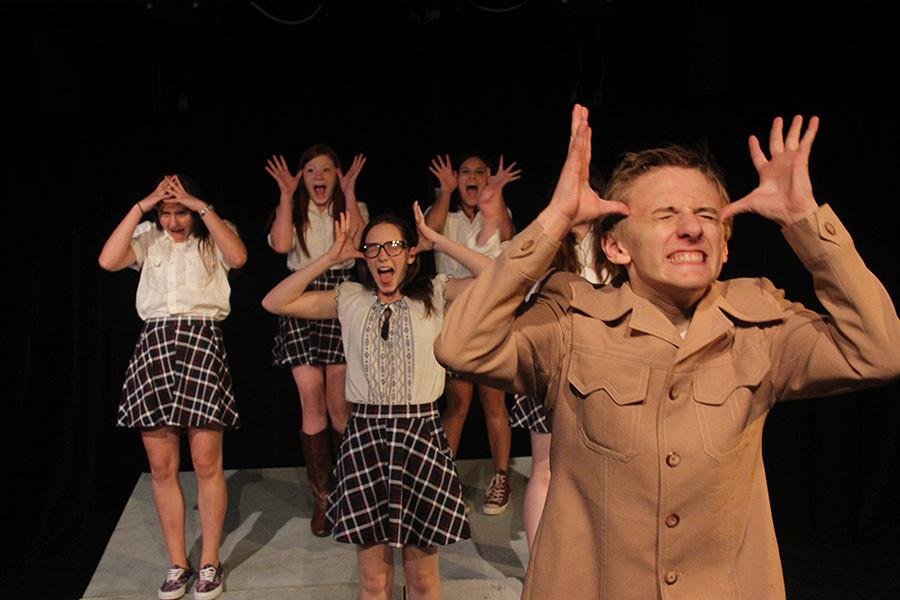 A scene in the play of Find me

The theatre department brought a night of questions about insanity, abuse, and the tricky subject of parental love. Find Me was performed April 10 and the theatre room was packed full. Some of the audience had to stand because there were no more chairs available. The play was originally in the hands of Tech Director Chuck Harris, but was handed over to senior Jorden Hoelscher who was originally was the Assistant Director.

“Jorden [did] a great job,” Harris said. “She has some great tech ideas and character ideas, she is able to control a rehearsal. That’s why I handed it over to her.”

The play is set in Britain in the 1970’s and is the life story of a very strange girl named Verity Taylor. Verity suffers from a mental illness (that is never diagnosed) that haunts the girl from the moment she’s born to the moment she dies. Her father, Mr. Taylor (senior Dillon Hausam), mother Mrs. Taylor (sophomore Cindy Nguyen) and younger brother Mark (sophomore Jacob Vaughan) all handle the young girl differently as she struggles through mental hospitals, the need for a family, and the uncontrollable forces inside her mind.

“It’s an interesting drama,” Harris said. “It has some elements of a light heartiness, but also it’s a very sad situation. I wanted to have a discussion on mental health in both America and England.”

Verity is played by five different actresses: senior Lyrik Kootungal, junior Kaily Pollchik, and sophomores Tanja Milanovic, Gigi Allen, and Emily Pritchett, each a different personality. The play explores the meaning of family love and the inner demons of one poor unfortunate little girl. The show has been a work in progress since February and everyone worked on the development of the script to bring it into life.

“It’s been interesting,”Actor Dillon Hausam said. “I came in knowing absolutely nothing, I’ve had a very chaotic time but it’s becoming more comfortable as I’ve gone along.”