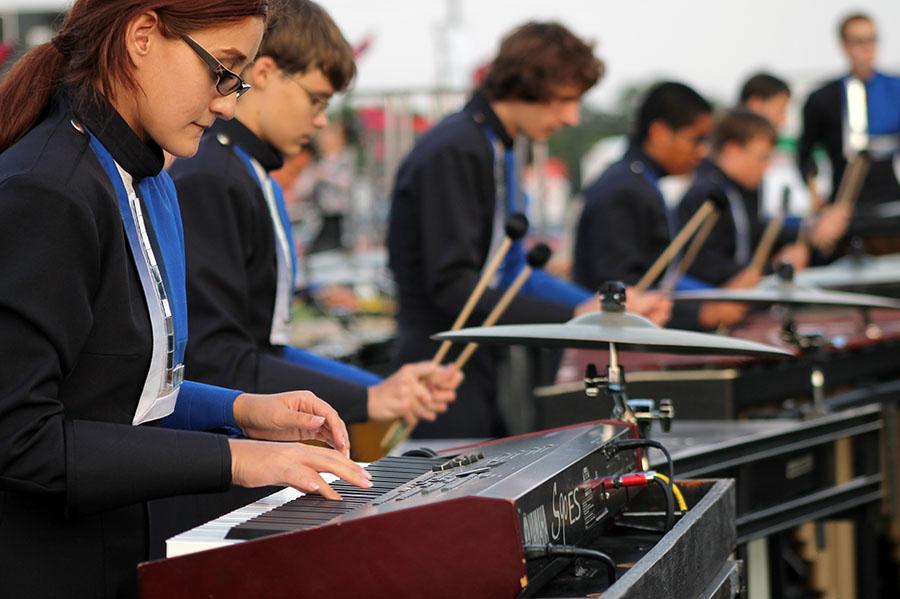 The pit plays the opener of Color Study

by Siandhara Bonnet and Caroline Cravens

March-A-Thon, the main fund raiser for the program, took place on October 4 at Bible Stadium.  Friends, family, neighbors, or even local businesses  make donations that can either be per minute or just a one time donation. The money earned is used for the general band fund which includes equipment, instructors, and transportation. Cash, checks, and credit cards are accepted, and must be collected and turned in before the start of the March-A-Thon to count for any incentive.

At 1:00 p.m., band and guard students reported to school for a special rehearsal with a clinician where they marched for four hours, a total of 240 minutes. Before the day had even started, however, the students had raised about $35,500.

“I emailed my family that lived really far away, and I called my friends who live closer to ask them to support me and give me money,” Senior drum major Holly Ekas said. “The directors were really excited [about all the money collected].”

After the almost complete performance at 7 p.m., assistant director Mr. Selaiden announced that the grand total collected was $37,510. Although they didn’t reach their goal of $40,650, the directors and band as a whole are pleased with the outcome. However, the band is still collecting money throughout this week. Right now the total amount of money collected is $39,275.

“It was an amazing feat for our program; that money goes to competitions, transportation, new uniforms, and the like,” Junior drum major Tristen Banuelos said. “After the March-A-Thon we thanked the community and gave a public performance for them.”

The purpose is not only to raise money for the band, but to also improve themselves in their show.  After winning 2nd place overall at Bands of America – Austin, they have a lot to work for and are very close to being the best.

The band will perform their complete show at the football game against Cedar Park this Friday. Congratulations, band!