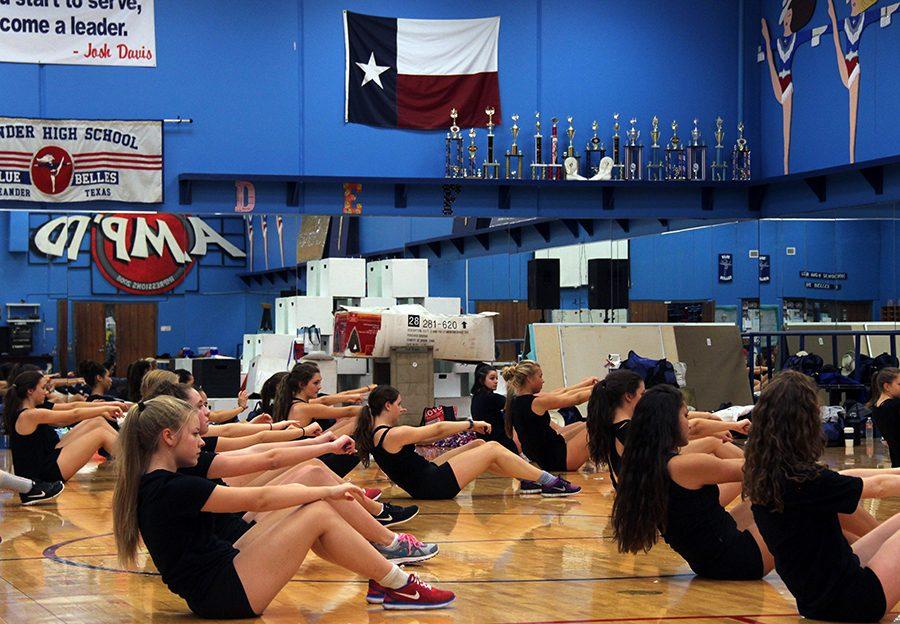 The Blue Belles doing different exercises and stretches during their camp ‘Metamorphosis’. Their workouts are called ‘go hard’ workouts.

The Blue Belles dance team have finished their first camp of the year, ‘Metamorphosis’. The camp is designed to help train for the multiple dances the team performs during the fall as well as building camaraderie and team bonds.

“Well metamorphosis means change, looking beyond strengthening our bodies through the “go hard” workouts that are expected, we are there to help the new members joining the Blue Belles family,” junior Inca Krones said. “We’re also there to build as a team by making new friends along with memories while mentally and physically preparing for the new year to come.”

During their camp, the team learned the dances that they will be performing during the football halftimes, new routines and sharpening their previous routines. It was also the first chance to begin working as this years team.

“This week really made me and I think all of [the Baby Belles] feel like actual Blue Belles because even though we have technically been Blue Belles since May, it didn’t really feel like we were until this week,” sophomore Kaelin Winters said.

They’ll be performing at all the football games at halftime and at pep rallies as well as iDance later in the semester.

“I have a feeling it’ll be a great year for Blue Belles,” Krones said.