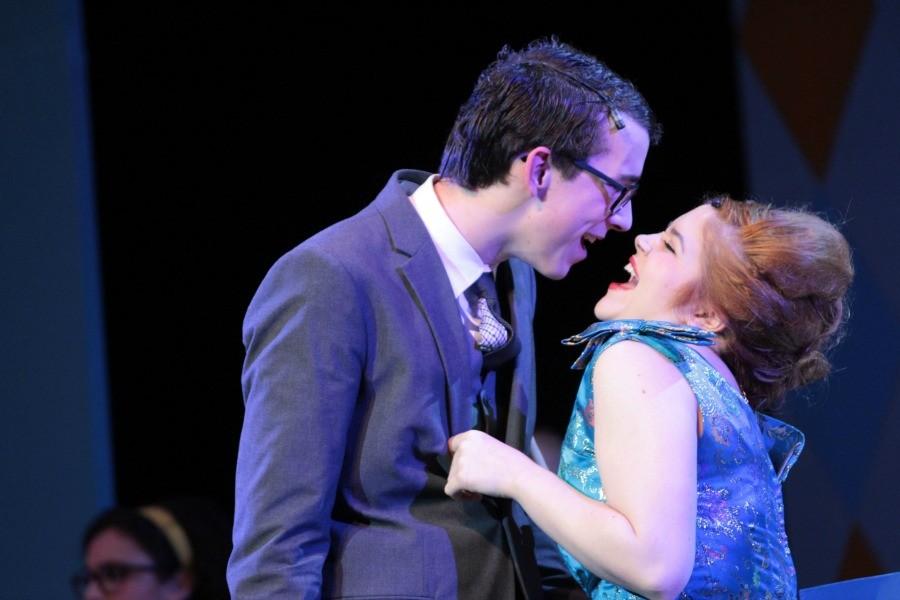 Champion and Berlinger during the musical

In addition to awards being announced, there will be several performances. All the individual award nominees perform in a group number, for example, all the best actor male nominees will perform together. While they all perform together, each actor/actress has a portion of their music during the group number.

“Only nine guys out of 27 schools got nominated, so it’s awesome,” Ferguson said. “It doesn’t even matter if I win, it’s just an honor being nominated. I can’t wait to see the results.”

So far the actors and actresses have had a lot of rehearsals to get ready for the big GAHSMTA performance.

“It’s pretty crazy because we have to drive downtown every weekend and it goes from 10 to 10,” Ferguson said. “So it’s twelve hours, but it’s so fun, you get to meet all kinds of fun people. It’s just really cool.”

There’s also a bunch of other performances as well. Senior Lyrik Koottungal and sophomore Matthew Kennedy were chosen by Mrs. Major to be apart of the finale.

“The song that we perform was specifically written for these awards so it’s unique,” Koottungal said. “it’s really fun, all the pairs wear costumes from their musicals so there’s all these different characters doing one piece together. It’s also interesting to get to know people you wouldn’t really meet otherwise, and it feels really powerful to be able to have so many different people come together and perform something amazing.”