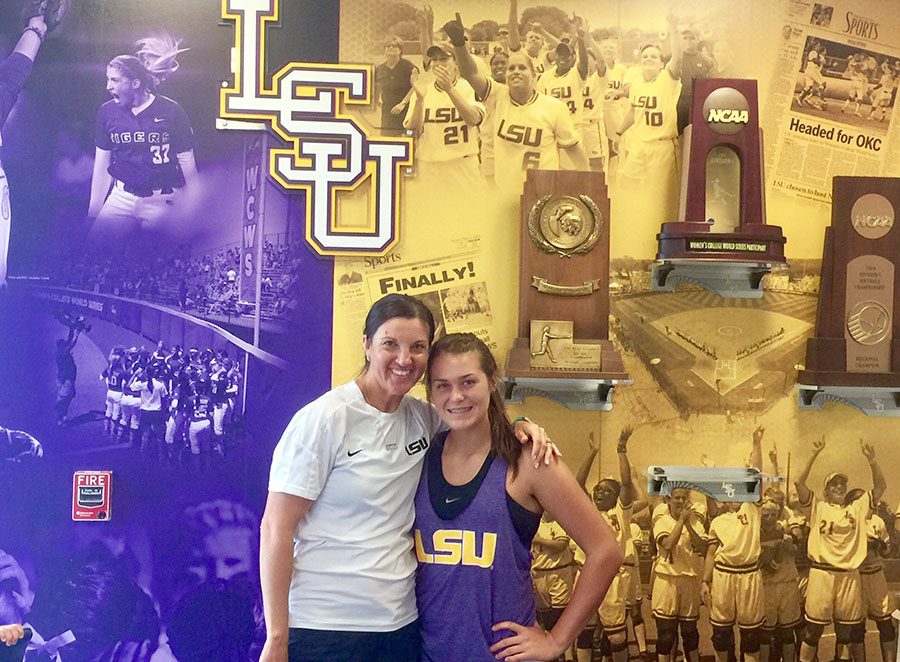 This past summer freshman Baylea Brandon committed to LSU to play D1 Softball. She has been playing softball since she was six.

To continue to the next level of sports for high schoolers requires the three important factors of time, dedication and hard work. Committing to a college to continue their sport is the goal of many. Lions have gone all over the country to play the game they love. However, for one freshman, it led to a commitment last summer to LSU for softball.

Baylea Brandon has been playing softball since she was six years old. This past summer, she committed to Louisiana State University (LSU) in Baton rouge, Louisiana to play softball.

“[Committing] was like the most amazing feeling ever,” Brandon said. “I finally felt like all my hard work payed off.”

Brandon started playing when she was six, when her parents noticed how much she loved to throw things, so they signed her up to play softball.

“When I first started playing softball I absolutely fell in love with the sport,” Brandon said. “As I grew older, my love for the game kept growing and growing.”

She first played for the Sabine Allstars in Louisiana, but when she moved to Texas in third grade she started playing for Texas Blaze and has been with them ever since. This year she plans to play her first year for the school team. During this time she has continued to love the game.

“Softball is really the only thing I can say that relieves any kind of stress I have,” Brandon said. “When I’m feeling stressed over absolutely anything, I go outside and swing my bat or pick up a ball. I love softball because no matter if I’m having the best day of my life or the worse, when I step on the field, all of that goes away.”

Playing hasn’t always been an easy process she says.

“Softball is a game of failure, and that’s why I love it the most,” Brandon said. “I’ve been through many struggles, at times I don’t know how I got through them but I did. There was a period in my life where I felt so hopeless and just [didn’t want] to play softball anymore. College coaches saw me struggle for months and months; not just college coaches, but my dream school coaches.”

However, she overcame her problems on the field.

“I put myself down for months following but then I finally realized something; and that was who I am,” Brandon said. “Ever since that period of failure after failure, I realized who I am and what I am capable of. Every time I step on the field I tell myself “I’m Baylea Brandon” and I think that has helped me so much.”

During this period in the recruiting process, LSU continued to show interest and this past summer Brandon made the decision to make a verbal commitment to attend when she graduates.

“I am so excited to finally live my dream in 4 years,” Brandon said. “I love softball more than anything in this world and without it, I don’t know where I would be.”