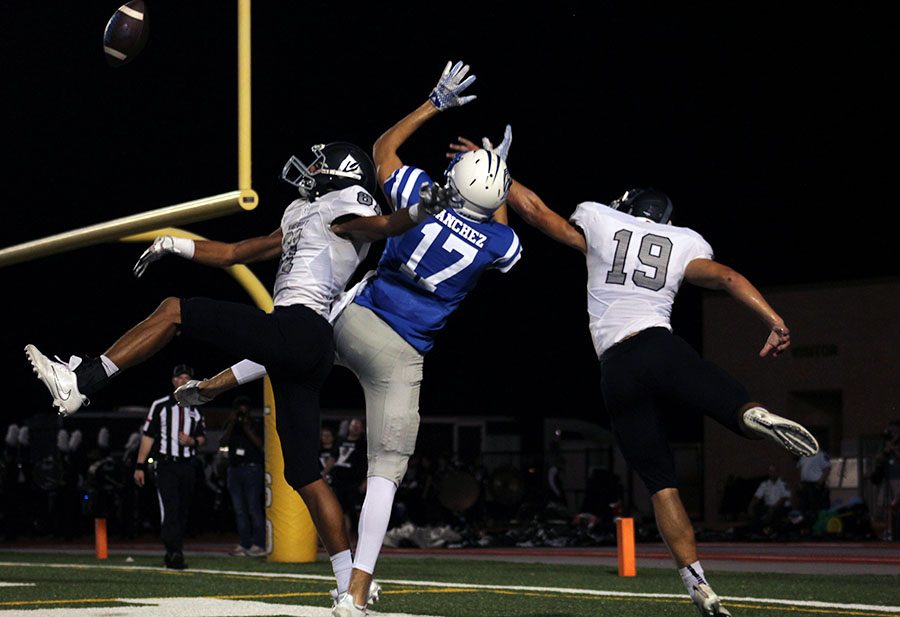 Junior Ismael Sanchez attempts to catch a pass in the endzone. Senior Alex Hensley was the only player to score for the Lions on a touchdown.

The homecoming game last Friday ended in another loss for the Lions as they were defeated by the Vandegrift Vipers 13-63.

“The difference between our defense and their offense was that we turned the ball over three times in the third quarter for touchdowns,” head coach Tim Smith said. “You cannot turn the ball over and expect to do well.”

The Lions got an early 3-0 lead from a 27 yard field goal by sophomore Eli Gehman. However, the Vipers responded by scoring three unanswered touchdowns. Gehman kicked another goal in the second quarter to draw the score to 6-21 but Vandegrift would go on to score two more touchdowns before the half ended with the score at 6-35. In the second half the Lions’ only points came from a one yard touchdown by senior Alex Hensley while the Vipers managed to score four more touchdowns. The game would end with the Lions earning their sixth loss of the season with a score of 13-63.

“We need to focus on working as a team and eliminating mental errors before next game,” Hensley said.

The next game will be on Friday, October 20 against the Hays Rebels at Hays High School starting at 7:30 p.m.