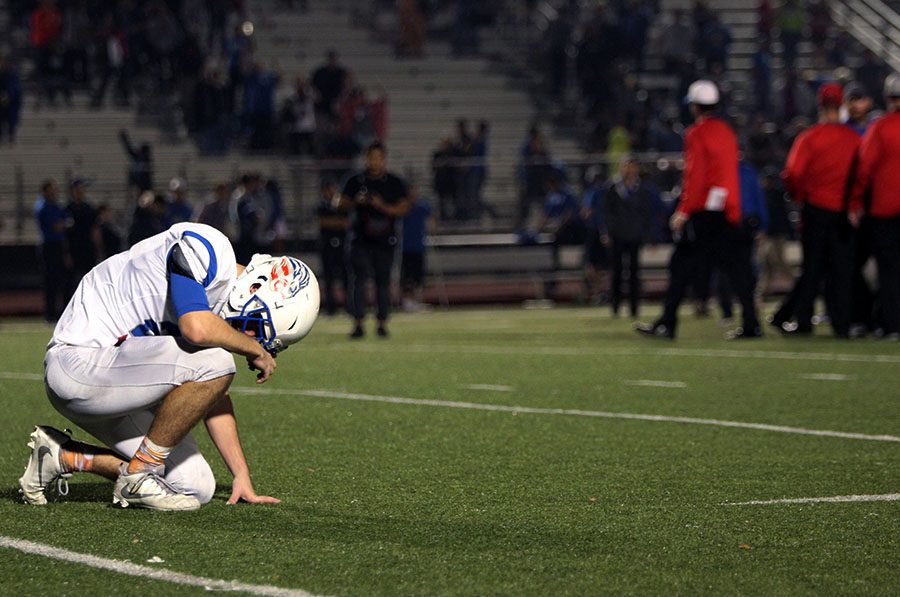 A Leander player kneels in disappointment after the game. The Lions did not advance to playoffs due to their loss.

The Lions were defeated by the Lehman Lobos 21-23 in the final game of the season after failing to reach playoffs due to the loss.

“We were pretty focused, it’s just that we were really beat up from those games against Lake Travis and Westlake,” head coach Tim Smith said. “They wore us down mentally and physically. However, mentally [the team] played as hard as they could every play and the effort was there. I never saw anybody lay down.”

The Lion offense got on the board first with a touchdown by sophomore La’Tavaius Brown after less than two minutes into the game. Later in the first quarter, Kyle Irlbeck ran 94-yards to bring down a Lehman defender on the Lions own 5-yard line after they fumbled on Lehman’s 1-yard line. On the following play the Lobos ran the ball for a touchdown to finish the quarter tied 7-7.

“It was pretty exciting,” Brown said. “It got us going, but we knew that we couldn’t stop there and that we had to keep going. We knew we had to come out even harder than we did in the first quarter and execute our game plan better.”

Lehman got into the lead in the second quarter after a 14-yard touchdown, but junior Jake Egelsee tied it up again after he caught a 2-yard touchdown pass. However, the Lobos went into halftime in the lead after they scored an 8-yard touchdown pass with 20 seconds left in the half. The resulting PAT was missed ending the half 14-20 Lehman.

“We were in the same position versus Vista so I knew we were capable of making plays and winning that game,” Egelsee said.

In the third quarter the Lions started with an onside kick that was recovered by Lehman. However, the defense won back the ball off a fumble. Junior Alex Williams finished off the following drive with a rushing touchdown to go into the lead 21-20 at the end of the third quarter.

“It felt awesome playing running back again, but also because I just love helping out my team,” Williams said. “It was pretty cool to score for once.”

With just under five minutes left in the game, Lehman kicked a field goal that would eventually be the game winning kick. After the Lions failed to convert on 4th and 9, the Lobos got the ball back, but were forced to punt the ball. The offense started with their ball on their own 31-yard line with exactly one minute left in the game. Junior Dalton Flowers caught a 14-yard pass to bring the ball to the 45-yard line. Three plays later the Lions still hadn’t moved and were forced to go for it on 4th down. The intended pass was intercepted on Lehman’s 8-yard line with 33 seconds left and the game finished after the Lobos ran the clock off.

“I’m most proud of these kids because they honestly played for each other and they put their hearts in another person’s hands,” coach Smith said. “I think we overachieved, not in the record, but in every position they played above their ability and that’s a credit to our coaches and to all the players in our program.”

This was the last game for seniors after not being able to reach playoffs because of the loss. The Lions finished 2-8 in overall play for the year.