Spider-man branch-off leaves much to be desired 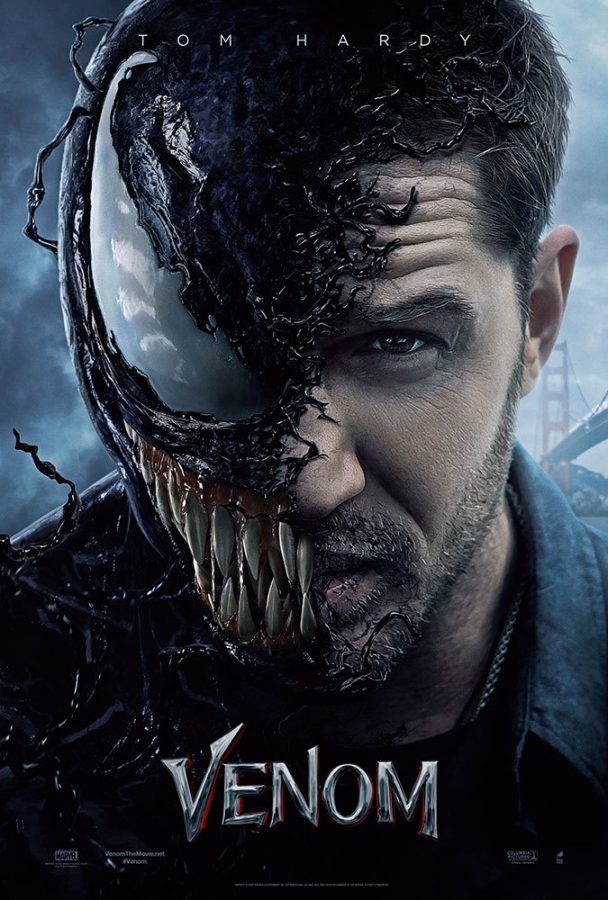 Sony Pictures recently released their widely anticipated ‘Venom’ in theatres nationwide. While Marvel fans eagerly looked forward to the anti-hero’s first solo film, the resulting movie was mildly disappointing, with a bizarre tone, shallow characters, and overall lack of originality. It earns a 3/5.

To presumably avoid Spider-man comparisons, ‘Venom’ takes place in present-day San Francisco, California. Tom Hardy plays an excellent Eddie Brock, a successful reporter engaged to the girl of his dreams. This all becomes derailed when Brock pursues an investigation on corrupt tech guru, Carlton Drake (Riz Ahmed). Drake has financed expeditions to alien planets, bringing by symbiotic life-forms that can attach themselves to organic lifeforms. One of these symbiotes is Venom, who comes in contact with Brock after the reporter breaks into Drake’s lab. This is when the action of the film starts, as Brock grapples with his newfound powers and subsequent loss of autonomy.

The most jarring part of this film is the tone it tries to take. ‘Venom’ at times comes off as campy as if it’s trying to piggyback off of the successes of other comedic-super movies such as ‘Deadpool.’ However, this type of lazy humor doesn’t exactly fit with the overall storyline; the idea of being infected by a hostile symbiote is terrifying, yet this experience never seems to take an overtly emotional toll of Brock. Instead of depicting ‘Venom’ as the villain he is, Brock seems to embrace the alien life-form as a friend, and offer no real resistance to the symbiote taking over his body. Had ‘Venom’ been taken down a darker path, it may have had a more appropriate characterization of the subject matter.

Another fault on the film is the lack of depth in its characters. Hardy plays Brock phenomenally well; the character has unique ticks and patterns of speech that make you believe that he’s a real person. The other actors, however, are lacking in this development. Michelle Williams plays the love interest of Brock, but the two have little to no chemistry any time they are on stage. Ahmed’s villainous role is so cartoonishly transparent in his motivation that there is no sympathy for the character. Every opportunity the film has to create complex characters is ignored, as each actor seems to play into a trope to find their persona.

This lack of character development lends itself to a completely predictable plot. We know Venom will eventually meet Brock and wreak havoc, we know there will be an epic showdown in which Brock (and Venom) emerge victoriously, we know that there are no real stakes at hand from the first few minutes of the film. There’s a car-chase midway through the movie that displays Venoms powers as seemingly endless. He’s bullet-proof, he can morph to any shape and reach across any distance in order to escape certain capture. When a character’s powers have no limitation, it takes any tension the audience may have felt out of the scene. The ‘good’ guys will win because the script wants them to, not because they have to struggle to overcome obstacles or develop as characters. The lack of depth in the script itself creates a movie that is so-so and leaves no lasting impact on the viewer.

Sony’s ‘Venom’ left much to be desired. What could have- and should have- been a breakout film was mediocre at best. Had they played into the depravity of the character, they could have had a blockbuster on their hands. As it is, the comic-book adaptation proves a forgettable installment.