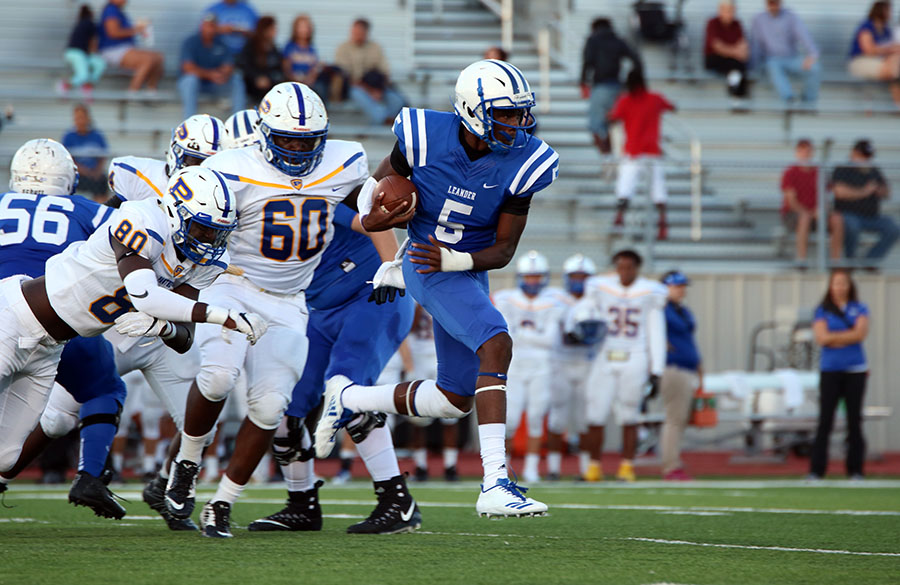 Junior Rashad Carter runs past the Pflugerville defense. He was replaced in the second half by sophomore Will Loofe.

In the second game of the season, the Pflugerville Panthers defeated the Lions 13-30 in a back and forth game.

“We all played as a team and never stopped playing hard,” senior Jake Egelsee said. “We just had some coverage bursts and some mental mistakes that we can’t afford to have.”

The game started right away with a turnover when Pflugerville recovered their own kick. In the resulting possession the defense held the Panthers to a field goal but the ball was dropped after the snap and the Lions had the ball again. The offense drove down the field where sophomore Eli Gehman converted a short field goal to put the score at 3-0. After the first quarter the Panthers completed a pass for a touchdown but senior Noah King prevented the two point conversion to keep the score at 3-6. However, in the final minutes of the half, senior Alex Hensley stripped the ball from a Panther running back and made the five yard return for a touchdown. The half would end at 10-6 Lions.

“Offensively we moved the ball around a lot and kept their defense guessing,” sophomore Will Loofe said. “Defensively we executed perfectly and stopped them on multiple drives.”

The Panthers came out of half down by four but started to pull away in the third quarter after starting quarterback junior Rashad Carter had to leave the game. After converting a one yard rushing touchdown Pflugerville completed a 28 yard pass to bring the score to 10-20. Four minutes later they would rush for a 28 yard touchdown to end the third quarter in the lead by 17. A back and forth last quarter saw the Panthers add to their lead with a 30 yard field goal. Gehman would go on to convert another field goal but with only ten seconds left it was too late and the game finished 13-30 Pflugerville.

“Rashad is a really good player and he brings a different dimension to the game with his running and throwing,” head coach Tim Smith said. “I don’t know if it deflated us but we have to deal with a situation like that, we have to overcome that adversity. We still got eight more games and they’ll rise to the occasion.”

The next game will be on Thursday, September 14 starting at 7 pm against the Westwood Warriors at Dragon Stadium.