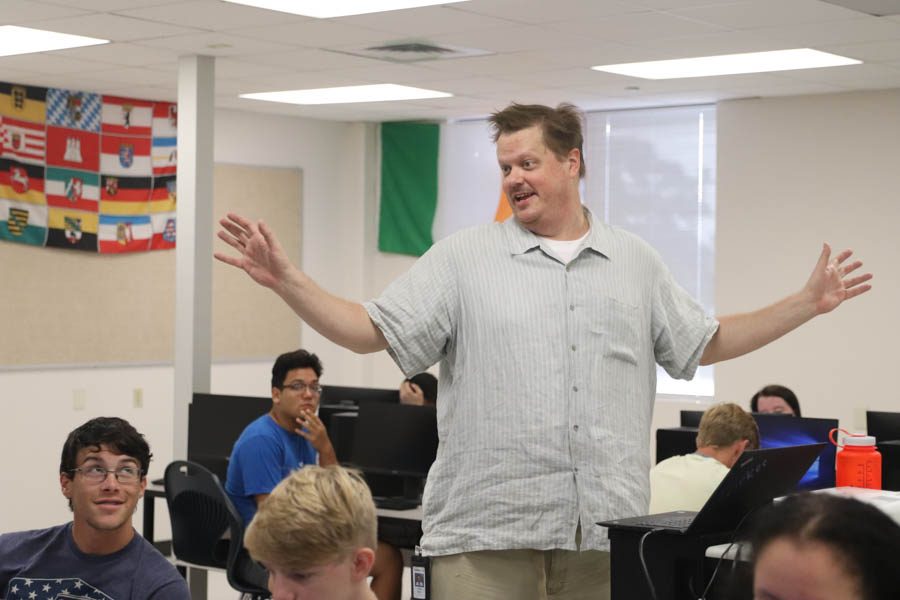 In room 2323, av teacher James Dirkes talks to his class about the history of movies. This was just one of many lectures for Mr. Dirkes.

Fighting the bustling traffic, and waking up early every day to attend work at Crockett High School quickly became an inconvenience for AV teacher James Dirkes. However, with an opening for a new teaching position in Leander, Dirkes has finally found where he belongs, and it’s only 1.8 miles from the neighborhood.

“I lived far enough away where I could tell students my address and give them a key to my house, and I knew that nobody would ever show up,” Dirkes said.  Now, when I walk out of my house, my next-door neighbor is a soccer player, next to them is band, and next to them is one of the Blue Belles, but I like that”

From a young age, Dirkes fell in love with theater. He started out at Baylor as a theater major, then later transferred to UT. Switching majors was something common for Dirkes. He majored in theater, English, psychology and social work. However, when he turned to film, he found what he wanted to do.

“Back [in high school], I was primarily an acting student, then I reached the point where it came to be a profession. I realized being 6’8” eliminates about 98% of the roles from even being something I’d be considered for. I got my two degrees from UT, a Bachelor of Science and Radio-Television-Film, and a Bachelors of Arts in English. From there, I worked on  Idiocracy [a film] by Mike Judge for about a month and a half and got to hang out with some really cool people on it.”

Before becoming a teacher at Crockett, Dirkes took on many different occupations. From working with production companies on many different film projects to side jobs that he continues now, his love for film grew steadily.

“There’s a guy in Deadpool whose referred to as fat Gandalf, and I’m very good friends with him because I’m his stand-in,” Dirkes said. “Every time that he works in Austin, I get to make 100 bucks a day and hang out with people like Luke Wilson. Best job ever.”

With time, Dirkes began to work at Crockett High School where he taught for 14 years. He started out teaching English, Film History, and Creative Writing, but he later transitioned into AV production.

“I always wanted to move into this,” Dirkes said. “I met the AV teacher at Crockett five years before he quit, and I said I want your job. The reason I wanted to do this is because, even when I taught English my focus was on storytelling, and what I love about AV is even when you’re making a film or podcast even if it’s news, you’re telling a story. I’ve made people create stuff that I get to consume as a fan, and that’s the best thing in the world.”

According to Dirkes, teaching here has proven to be fairly different than at his previous high school. There are different challenges that students face at each school, and many children dealt with issues there that aren’t as large here.

“Down at Crockett we have a lot more single parents, and we have a lot of parents in jail,” Dirkes said. “Here, you guys have so much more pressure put on you academically. Down at Crockett, a majority of our kids are the first in their family to ever finish high school. Most of them are the first person to ever apply for college, so getting them to where they can is different than the expectation that you’re going to college.”

Dirkes’ goal is to build a network of high-quality student-created media where he can build a functioning team. In the end, he hopes to put as much as he can in his students’ hands.

“I’ve always focused on a development of individual style along with the technical aspects,” Dirkes said. “I’ve always said that the technical side you can learn online. It’s impossible for me to teach as much and as well as Youtube can. My goal is always not just for students to learn how to make movies, but to learn how to make movies and audio for everything that is unique to them.”