Wrangled by the Rebels 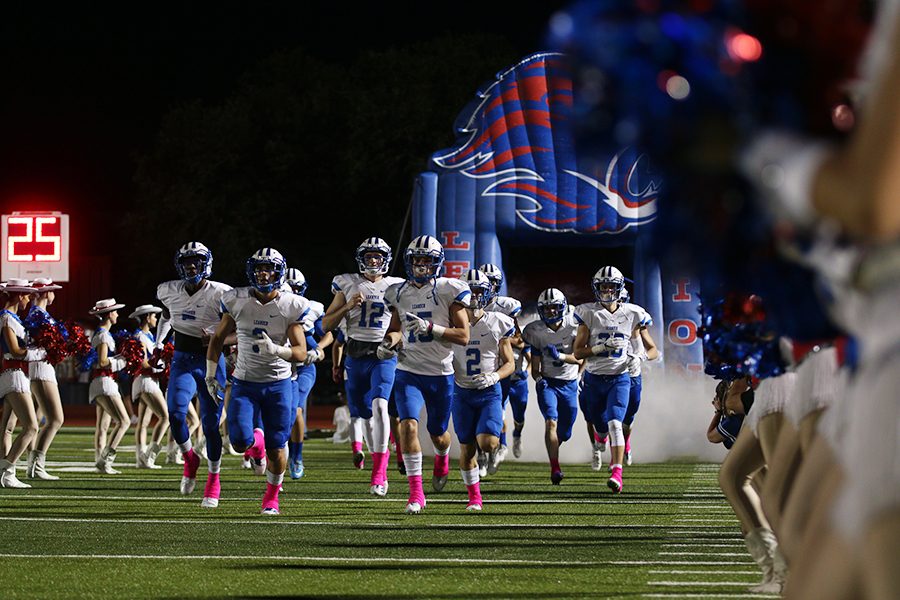 The Lions run out to start the game. The team currently has a record of 0-7.

The Lions failed to score against the Hays Rebels last Friday, as they were beat 0-43.

“I think that we played hard for the whole game, even when we finally realized that the lead was too big to overcome,” junior Riley Wells said. “We definitely stayed together as one, and didn’t turn on each other.”

The Rebels got off to a quick lead with a touchdown and two point conversion to make the score 0-8. They would then score off a 11 yard run to finish the first quarter with the Lions trailing 0-15. In the second quarter, Hays would score three more unanswered touchdowns. The Lions would intercept the ball halfway into the third quarter and after driving up the field attempted a 54 yard field goal. It would be blocked and returned for a touchdown to make the score 0-43. Neither teams were able to convert any points for the remainder of the game.

“We just couldn’t push the ball and get them off us, but again we just got to get [our players] healthy,” head coach Tim Smith said. “We had some guys as well as our team as a whole that never gave up. The players are still playing as hard as they can and that’s always a positive.”

Next game will be this Friday, October 27 at Bible Stadium against the Lake Travis Cavaliers starting at 7:30 p.m.