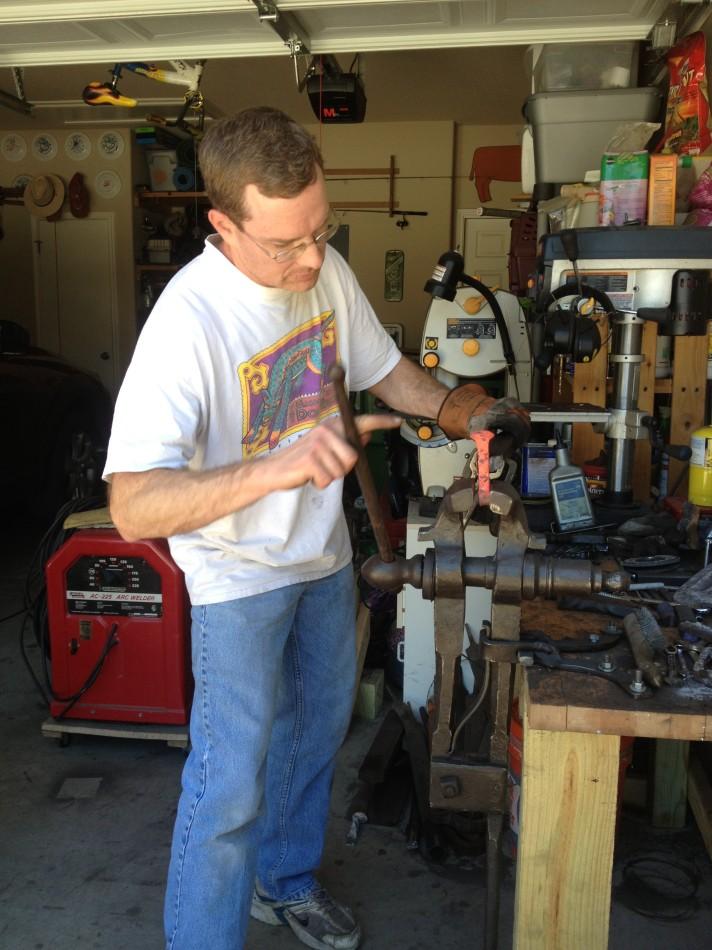 A fascinating person is someone who either has done many interesting things, or has many interesting qualities. My dad, Dan Cravens, has had several unique hobbies. These hobbies and his experiences are what I think makes him an interesting person.
Right now, my dad works at IBM, doing development level support; which means he helps businesses when they have performance problems. He didn’t always want to have that job though, when he was younger, my dad wanted to be a mechanic.
“When I was younger I wanted to be a mechanic, because I like working with my hands, and I like cars and engines. I liked doing that sorta stuff,” Cravens said. “I changed because my parents talked me into going to college, so that it would open more doors. I wanted to be a grease monkey.”
My dad still enjoys working with cars and engines. At the moment there is a 55 Chevy Truck in his garage that he is currently fixing up. The truck has been there for as long as I can remember, but he has just now started really working on it.
“Well in the past I didn‘t have a real incentive; the problem was always if I fix it up then what do I do with it? I couldn’t afford to drive it and have the Honda at the same time. It just didn’t make financially good sense.” Cravens said. “The reason for the truck now is that my lovely daughter turns 16 very soon and the plan is for her to start driving the Honda, and I start driving the truck again.”
In the past my dad drove the truck every day. Back then there were a couple of problems with it, but now the truck won’t drive out of the garage.
“There was an auto repair place, and the truck was in the front and I paid $2,000 for it; it didn’t quite make it home, I had to do some work on it.” Cravens said. “Now I have to tune the carbonator, get it running right, and put the front sheet metal on it.”
My dad first really learned how to work on cars when he had a Datsun 260z. However, the 55 Chevy truck is his favorite.
“I had a Datsun 260z which I worked on quite a bit and I learned a lot about engines and things from that car, but it was not necessarily a good car for me to have. I typically would drive too fast and get lots of speeding tickets.” Cravens said. “The truck is my favorite though, because it’s an American made car, it’s easy to get parts for; it just has more nostalgia to it. It definitely has more classical value.”

Lately, my dad has been doing a lot of welding and black-smith work in the garage too. This hobby is rather interesting because you don’t find someone every day that can work in a forge, and make different and useful things by hand out of metal. He can make all sorts of tools, and decorations, by heating old metal and hitting it against his anvil or twisting it in the vise with a big wrench.
“I’ve always done a little bit of welding as needed, but with all the work on the truck I needed to do a lot more; and with the way the economy is we’re always kinda short on money it seems like. I thought with welding I thought I could pick up little odd jobs here and there, and then the black smithing has always been an interest because I still like working with my hands and making stuff. I’ve been able to sell most of the things I make black smithing which is good because it’s helped pay for, initially all the tools, and now it’s helping pay for parts for the truck and some of the bills and things. Not a lot but a little bit, but every little bit helps.” Cravens said.
Some things my dad makes in the forge are quite complex, others are quite simple. For example he can make little bottle openers out of wrenches, simply by twisting the steel (once it’s been heated and tweaking the wrench a bit. But a more complex bottle opener made from a railroad spike has to be drawn out, swirled, and tampered a bit with little indentions to make it open bottles.
“I think the thing that I like best to make is the real fancy customized bottle openers (the ones with the swirls). Those take much longer to make, you have to draw the steel out; you take a railroad spike that’s about 6 inches and you make it about 12 and so it’s a longer process, but it’s just more rewarding because you’re being more creative,” Cravens said. “At the same time I like the things that are easy to make that I can turn out really fast and make a good profit on; definitely need something that I can make fast, and sell relatively cheap that people like and people will buy. The easiest thing to make is to take old wrenches that I get from pawn shops, for 10, 25 cents each and after I forge em into bottle openers, I can get $10 for them. I can make one in about 10 minutes.”
Another one of my dad’s hobbies was running a Frisbee dog club, Austin Air Dogz. When I was younger I remember going out to the park at least once or twice a week to play Frisbee with my dogs and dad, and we’d even compete sometimes. We had two dogs, a high strung Australian shepherd (Shelby), and a hard-working golden retriever (Annie). As soon as my dad pulled out the Frisbee the two dogs always went nuts, and my dad enjoyed tossing the disc to them in his free time.
“The purpose of Austin Air Dogz was to focus all the energy of an Australian shepherd that we had gotten. She had so much energy and we had to find an outlet for that energy. So doing the Frisbee with her was an outlet for that, and it was a lot of fun. I think it was a valuable experience for me as well as for my kids. My daughter got a lot of experience being up in front of an audience (during shows for elementary schools ect…) I think that’s, well for a lot of people that’s very difficult for them and she got to have that experience at an early age as well as my 13 year old son.” Cravens said. “We had a golden retriever and she was a very focused and driven dog, but she didn’t have the greatest athletic ability but she played with a lot of drive and a lot of passion. It helped keep her in physical good shape; she had hip dysplasia but because of all the exercise she got, the hip joints stayed strong and she didn’t have the problems you usually get from dogs that have hip dysplasia.”
My dad believes that passion is the key to being happy, and you have to do what you enjoy doing.
“I would recommend finding something that you’re really passionate about, that you enjoy, and then work hard at it, and don’t let people tell you that, ‘you can’t do it’.” Cravens said. “My parents told me that without a college degree you wouldn’t be able to get a good job. Now hindsight, I don’t really know if that’s really true or not. I think people should really do what interests them, and what they like, and what they’re passionate about, more than just pursuing a degree because they think the degree will open the door. I mean it’s important to get an education, but I think it’s even more important to be passionate about something you’re doing. So if you can find a job or career that you’re passionate about, regardless of what it is you’re going to be successful at it because it’s something that you really like doing versus something that you feel like you have to do.”