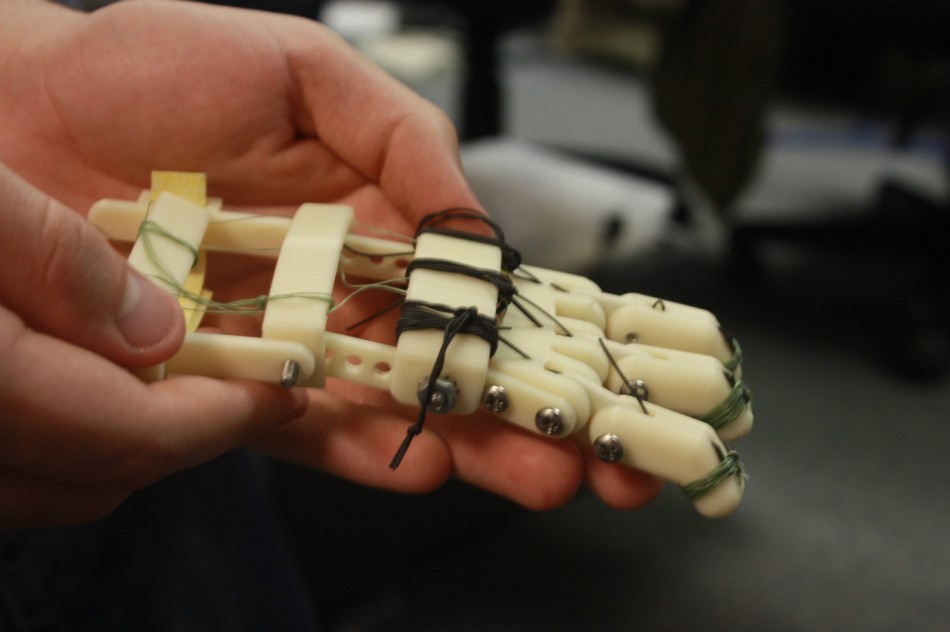 Everyone knows the phrase “lend a hand,” and that is exactly what our Skills USA team did for the family of a local boy, a two-year-old named Zaxton. The younger brother of a former LHS student, Zaxton was born with only his thumb and pinky finger on his hand and he needed an assistive device to help him grasp objects.

Armed with their knowledge of robotics and design, a purpose and a plan, juniors James Bell, Lexi Wilson and Jacob Ostrander set out  to create a prosthetic hand made out of plastic for Zaxton.

“[Zaxton] was not born with the three middle fingers on his hand. He kind of uses his hand like a crab claw, I hate comparing it to that but that’s what it’s like,” Ostrander said. “So we are building him a prosthetic hand.”

The prosthetic hand has the three middle fingers, and is constructed out of different materials. The hand has bungees and strings attached to the hand itself; the bungees are to hold the fingers up and the strings work to move the fingers. Once it is fit to perfect scale, the prosthetic hand will be given to Zaxton.

“[Zaxton’s] brother is a former student of mine, and his mom found a website where someone had done a prosthetic hand that you could download and print it to whatever scale,” Robotics teacher Mr. Herb Wasson said. “So this former student of mine called to see if we had a 3D printer, which we do, that’s how it started.”

The team submitted their design in the state Skills USA competition. They built the hand before the competition, filled out paperwork, and gave a professional presentation over the prosthetic hand. At the district competition, the team’s design placed first, which qualified them for State.

After placing first in the State competition on March 28, the team’s design advanced them to the National level in June where the competition is held in Kansas City, Missouri.

To go to the competition, the district gives $500 toward each student’s cost, but the entire cost of the trip is much more than that amount. In order to raise money for their trip, the students created a website for donations. If you visit http://www.gofundme.com/83yq7o you can read more about their story and donate money to help them go to Nationals.

Click the link for the KVUE story about the students and their bid to Nationals:
http://www.kvue.com/news/Leander-High-School-students-create-prosthetic-hand-for-young-boy-254659991.html