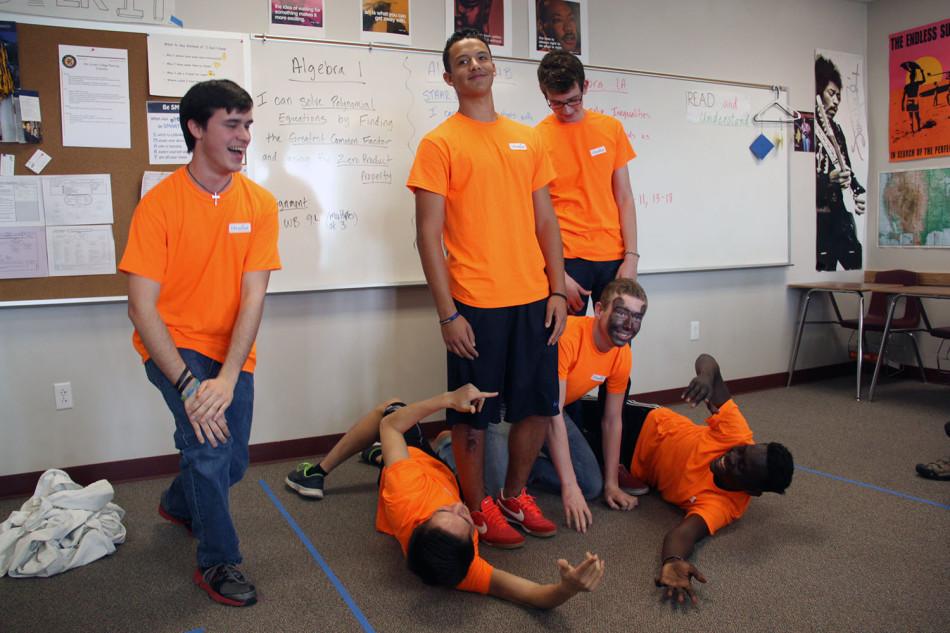 Destination Imagination (DI) truly is a creation of pure imagination; walking around the competition there are crazy props, polka-dot face paint, and if the judges didn’t say it couldn’t be brought, it’s probably there.

On February 22, the Leander DI team competed in two challenges, improvisational challenge: Pandemonium, and Extreme DI. Team members include seniors Alan Champion, and Brian Omondi; juniors Christian Vieira, Joci Guerra, Nico Champion, Elias Martinez, and Kade Ferguson. They won first in the Extreme DI challenge and second in the improv challenge.
The team will be moving on to state in the Extreme DI challenge. In high school challenges, typically only the first place team goes on to state, so they won’t be competing in the improv challenge again although they scored high.
“A lot of the stuff we do is for comical effect,” Nico Champion said. “Our improv skit was about a beekeeper and his daughter who got trapped in the ocean when a bear swam out and broke their boat to try and steal their honey. So they called a crayon maker from the future and he drew a flower, which attracted the bees to make honey to fix the boat.”
For Extreme DI, the team had no idea what their challenge would be like until two hours before their presentation. The team had to take pictures around the tournament and tell a story with them; they did a skit involving a police investigation. Each member was a suspect with a unique persona to help the team earn creativity points.
“We kind of thrive on the craziness,” Vieira said. “We didn’t know absolutely anything about it (the Extreme challenge). So as soon as we found out what our challenge was we just went for it, and kept the ball rolling after that.”
On April 12, the DI team will compete in the state competition at Pflugerville High School.
“We’re going to watch the team that beat us in the improv challenge and see what they do differently,” Nico Champion said. “There’s not much we can do different for DI Extreme because it just kind of happens.”