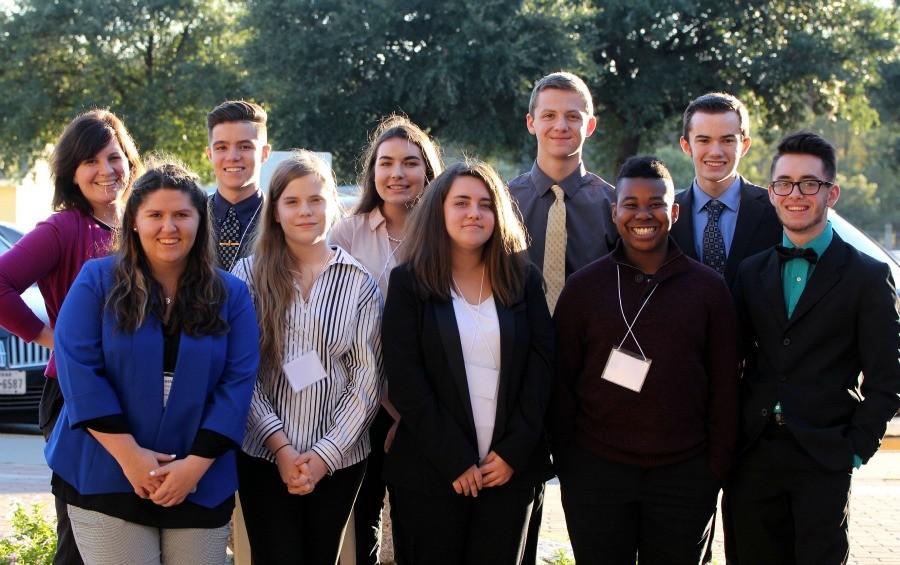 One year after the pilot program swept the awards at its first competition, this year’s Youth & Government team participated at District and received four Distinguished Delegates in this year’s competition, three in Media and one in Legislative.

“I could not be more proud of this team,” adviser Danielle Bell said. “They worked hard to get where they are and I know they are going to keep doing amazing things in this program. I can’t say enough great things about Ben [Henderson] from the YMCA of Greater Williamson County. It’s his first year with us, and he has two other schools he works with, and we appreciate him so much.”

Junior Jared Bouloy, who participated in Media last year, competed as a member of the Legislative section and drafted and debated a bill to require trained and armed military veterans to serve as protection on public school campuses. Bouloy received a Distinguished Delegate award in that section, ranked 3rd out of the top 40 students in the section.

“I have a passion for the political controversies as well as debating them [which is why I switched to legislative],” Bolouy said.

“Honestly, I was shocked,” Dyer said. “I didn’t expect it, especially being a freshman and my first year going, but I was so happy I started shaking.”

The media team worked on an online magazine for Youth and Government which was then published after the conference. As print or social media delegates, students were assigned stories that ranged from news to features, about legislative, judicial, or state affairs. Social media participants created blogs, photo essays, and live tweeted legislative sessions.

“What I did was go over the line of bills, see which ones I wanted to use [for the publication],” Dyer said.

Next, the team will register for the State Conference that begins January 29.

“I feel like I’m ready [for state],” Dyer said. “I would like to get an email to look over the cases, but other than that I have good confidence that our team will do great.”