Senior has bill passed in Youth and Government legislation

States that gender equality is needed to have abortion 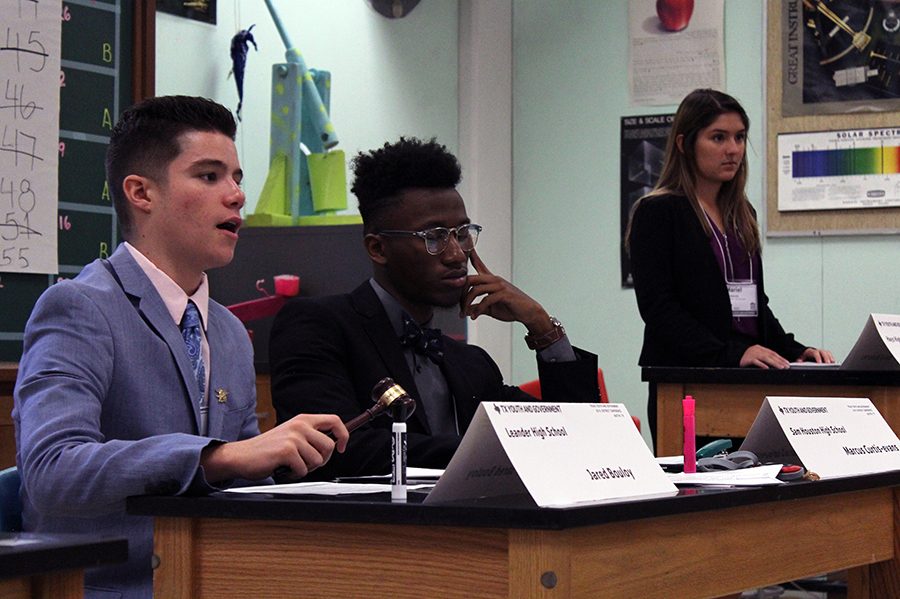 Jared Bouloy (far left) gives the ruling that the bill being presented will not be adopted. This is Bouloy’s third year participating in Youth and Government.

Exactly 55,902 abortions were recorded in Texas in 2014, and in all of those the final decision was put on the woman. In this new bill, in order to create equality for the man and woman, the man would be required to give his consent for the abortion to be carried out.

“Abortion is a very sensitive topic which is why it should not be just one person’s decision on whether the child should be brought into the world or not,” Bouloy said. “I think it is ridiculous to let petty situations like someone cheating and things of that nature to discourage life or potential life. People need to accept responsibility, both the man and the woman.”

Jared Bouloy, Leander High School delegation, had his bill passed in a 6 to 5 ruling. The bill states that for a woman to receive an abortion, she must have the consent from the biological father. Although this bill brings up the controversial topic of pro-life and pro-choice, Bouloy does not want to involve this debate in it.

“The bill itself is not getting rid of abortion, so it’s not a pro-life or pro-choice debate to where it would be debating on the act of abortion,” Bouloy said. “It goes more into the decisions behind it and who should be making those decisions.”

The opposition’s main concern regarding this bill is that the man may leave and that if he does, the woman should not need his consent.

“Although this bill was very moving and it puts responsibility on the man and really puts us on an even playing ground, the problem with this is does the man really care about his children whether it was planned or not,” Terrell Graves, Sam Houston delegation said. “While there are many [men] that do, there are many that do not, many who leave well early into the pregnancy and well into the birth. Examples, myself. My father left us as soon as me and my twin sister were born and my mother may not have aborted us, but she at least [would] have had the option to.”

Most proponents fully agreed with the author that responsibility needs to be held by both parents or parents to be.

“I favor this bill because it is part of the man’s choice,” Liberty Stewart, Leander High School delegation, said. “If the woman should break up with a man and discover she is pregnant it would be irresponsible and hurtful to inform the man she is pregnant and then say she is going to abort it anyway.”

The bill was passed 6 to 5 and will now be debated in the joint session.