Tale of the traveling stadium

Bible stadium through the years 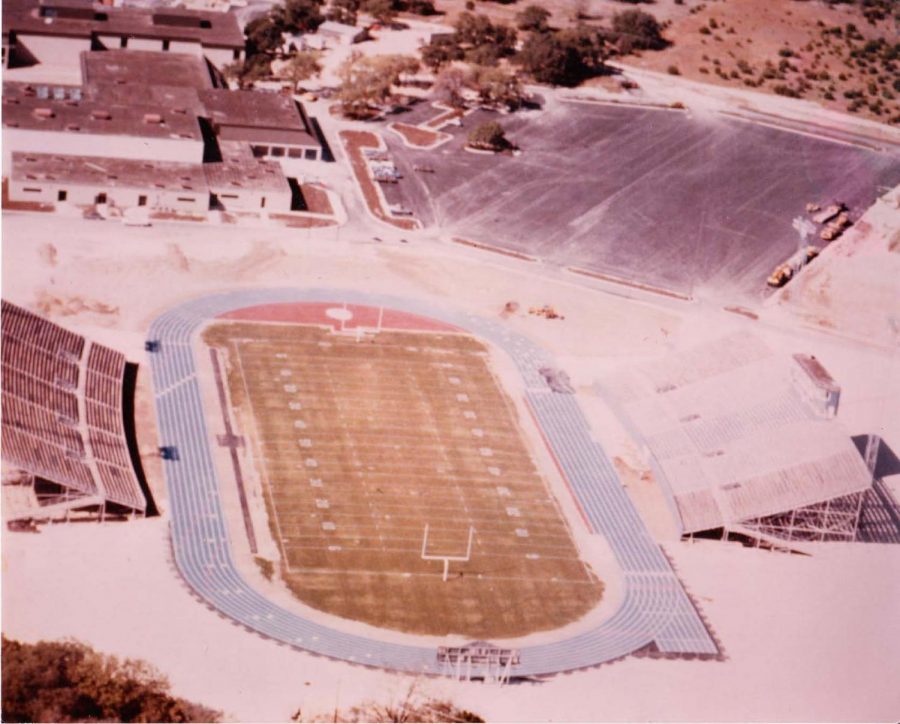 The original Lion Stadium after being moved from Odessa to Leander.

For decades, the A.C. Bible Stadium has been a hub for activities for the Leander community. From hosting stadium-packed, late-night football games, to day-long district track meets, many hold fond memories of the beloved Bible Stadium. However, most don’t realize the history surrounding it.

A.C. Bible Stadium was originally built in 1946 in Odessa, Texas where it was called the W.T. Barrett or “Mojo” Stadium. Then, Leander High School bought the stadium in 1984 where it was renamed to Lion Stadium. The 12,000 seat stadium, weighing over one million pounds, was then moved 282 miles across the state using 57 tractor-trailer rigs.

“I feel like it’s important for students and staff to know about the history of our school so we know where we came from,” advertising teacher Brittany Hefner said. “Changes in our school were a big deal to those who were here at the time, and there are good reasons for changing things.”

The stadium was officially renamed A.C. Bible, Jr. – Memorial Stadium in 1997. Bible served in World War II and on the LISD board of trustees for 13 years, he was also a Leander High School alumni.

“Mr. Bible was on the school board while I was a student in LISD and was instrumental in bringing in the likes of Mr. Rouse and Mr. Glenn who served our school and district for many decades,” principal Chris Simpson said. “We are the first high school in this area. Every high school that has been built has a piece of LHS in it. At one time all 228 square miles of the student population came to this place on Bagdad road.”

The stadium was rebuilt in 2008. The Home side was moved to the west side of the stadium, handicap accessibility to the press box was also added as well as more restrooms and concessions.

“I think in some ways renovations modernized our campus and gave us a facility that was our own and not purchased from another district,” principal Chris Simpson said. “It is such a beautiful facility with such history. I am glad the district opted to leave it on our campus.”

The construction team had nine months to tear down and reconstruct the stadium to be ready for the first football game in 2009.

“The renovations brought Bible Stadium up to a more modernized stadium which brought a more pleasurable experience for our students and guests,” LISD Chief Facilities Officer Jimmy Disler said. “Bible Stadium was able to be utilized for more than just football. District track meets are a very large event that brings many area high schools to our stadiums, and the renovations positively impacted those events as well.”

A.C. Bible Stadium has been in existence for 74 years. It has been moved across the state, undergone significant renovations and continues to be the center of many students’ lives.

“Understanding the history of it allows us to appreciate the memories, the education and the stories that this building has created,” Simpson said. “We need to appreciate the rich tradition of this campus and I think our story needs to be told.”