Inside look on Queen's teaching style 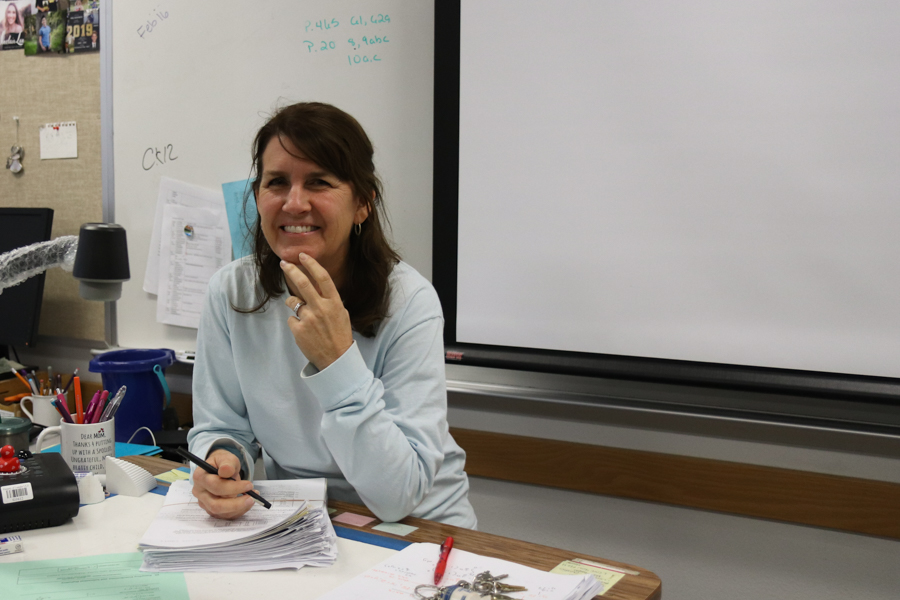 From 7:30 A.M. to 5:00 P.M. and even later, Monday through Friday, math teacher Shawna Queen can be found in her classroom working with students. Whether she is teaching one of her seven Advanced Placement math classes, working with individual students or assisting with Student Council or Mu Alpha Theta, Queen seems to have an endless amount of things to do during her 30th year teaching.

Part of the reason Queen has so much on her plate is because of the unique system she uses to allow students to raise their grades on assessments. Queen said it came about because of students’ fixation on grades without actually learning the material.

“I was venting about people not taking it seriously and it being all about the grade, and I was getting really frustrated,” Queen said. “Talking with kids, they told me that they liked having the ability to have a conversation to see what they did wrong. A lot of kids won’t ask in class, but if they know they’re going to get 5-10 minutes one-on-one with the teacher, they’re more willing to ask questions.”

This system gives students an individualized Khan Academy assignment. Completing that, along with assessment corrections, is followed by a short discussion with Queen.

“Students would get their paper back and they would memorize what they did on that paper, and they would come in and take the make-up without ever having actually studied specifics about what they needed to do,” Queen said. “Then, two or three weeks later, they’d forgotten it all. What I’ve found is that if a kid can turn around and explain it to me, it’s staying in their head longer. I feel like there’s more learning happening.”

While Queen said that the major problem with the system is not having enough time, she thinks the benefits that conferencing gives students are worth it, both for them and for her.

“I get to have more individual conversations with students,” Queen said. “A lot of that is academic, but it also helps me pick up more on their learning styles. That student who will never ask a question in class, I get to find out exactly what they don’t know because they are willing to ask when it’s just me.”

Queen said that while she hopes students leave her classroom being able to advocate for themselves, her students have also taught her much through her years teaching.