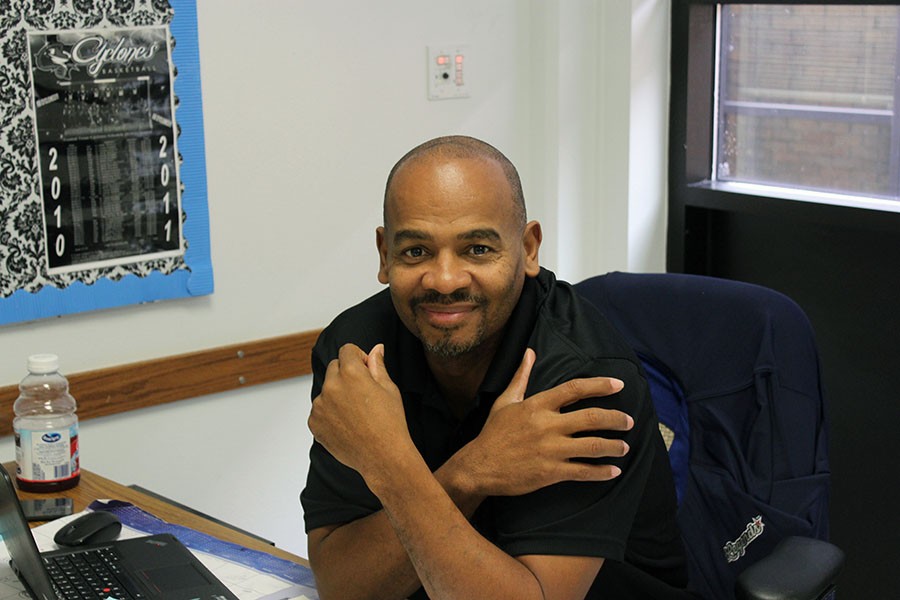 Curtis Jones in his classroom teaching AVID. He is also one of the Girls basketball coaches.

Every teacher has a story to tell. Jones’ story is a story of determination, hard work, and his love for his favorite sport, basketball.

Coach Curtis Jones grew up in Detroit, Michigan. After he was done with high school he got a scholarship at Huston Tillotson University. After graduating with his bachelor’s degree in sociology, he ended up back in Michigan, and started to coach in 1997.  He coached JV and varsity boys’ and girls’ basketball. After he got a masters degree in sports administration, he got another coaching job located in Wayne State University. He coached there for five years until he was offered a job at the high school by Coach Marshall.

“I actually knew Coach Marshall before coming to Leander,” Jones said. “I was very excited that she called me and offered me a job here.”

Besides coaching girls’ basketball, he teaches AVID. He is married and has two kids, Paige who is 11, and Peyton who is 8 right now.

“I really love Leander because of all its leaders that have come through here over the years,” Jones said. “All my students are awesome, and thirsty for knowledge. They’re all really great kids.”

His goals for this year is not only to teach as many students as possible, but make a state contending girls’ basketball team. According to Jones himself, this year’s team is not only full of so many great players, but leaders. The girls’ basketball team has built a tradition on what this sport actually means to them. So far, the team is 11-4, they even beat Dripping Springs at their own home court which actually hasn’t been done in five years. He knows that all them are great athletes and they all have a future in the game of basketball.

“It was a very exciting night for not me but all the girls when we beat drip,” Jones said. “ They all work really hard to get where we are know and it was all because of those girls.”

He attends to continue this tradition just like the previous coach, Jonathan Lamb. His plans on the future is to become an athletic director.

“Coach Lamb did an excellent job at Leander,” Jones said. “All I want to do is continue what he started.”