What It Takes to Be: A Military Prospect 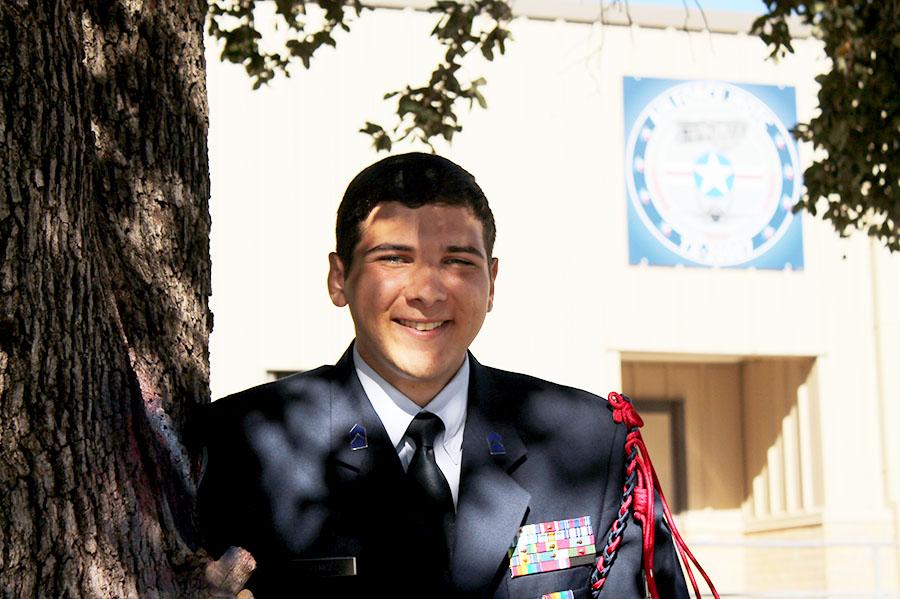 He just wanted to fill his dad’s shoes, make him proud. And now he is sure he does. Every time he dresses in uniform and sees his dad at home, his father smiles and takes him in for a moment. Senior Cadette Second Lieutenant Brandon Perez knows his dad is proud of him.

Perez’s father is the one that introduced him to Air Force Junior Reserve Officer Training Corps. He pitched it to him and told him how much good it would do him.

“I wanted to follow in his footsteps,” Perez said. “I always look up to my dad; I was always with him.”

After joining ROTC his sophomore year, it has helped revise Perez, allowing him to have more confidence in what he does.

“It’s given me more leadership characteristics,” Perez said. “Growing up I was a very shy person. Very closed off, very just, I’m the kid in the corner not saying anything.”

It has also brought him a direction to head toward.

“From where I was to where I am now,” Perez said, “I’m in the best shape that I’ve ever been in. I have a sense of direction, finally, and I know what I want to do. I’m mostly interested in law and justice.”

“I have family spread throughout the branches,” Perez said, “but mostly what I’m leaning towards is military, military personnel within the special forces in the air force.”

Within the three years that Perez has been in the program, he has never once wanted to quit.

“Since day one, I remember seeing our Major, our instructor, Major Neidecker,” Perez said. “He was wearing this bright yellow shirt. I had no idea who was the instructor, who was who, and since day one I fell in love with it. First day, I made so many friends first day.”

The program hasn’t just revised and pointed Perez in a career direction, it has given him another family.

“Most people think it’s…you’re signing your life away to the military when you join it, but that’s not how it is,” Perez said. “It’s actually a giant, big family, and you feel welcome in there. You can be anyone you want over there in the building because it’s so welcoming and you feel at home; it’s your home away from home and your second family essentially.”