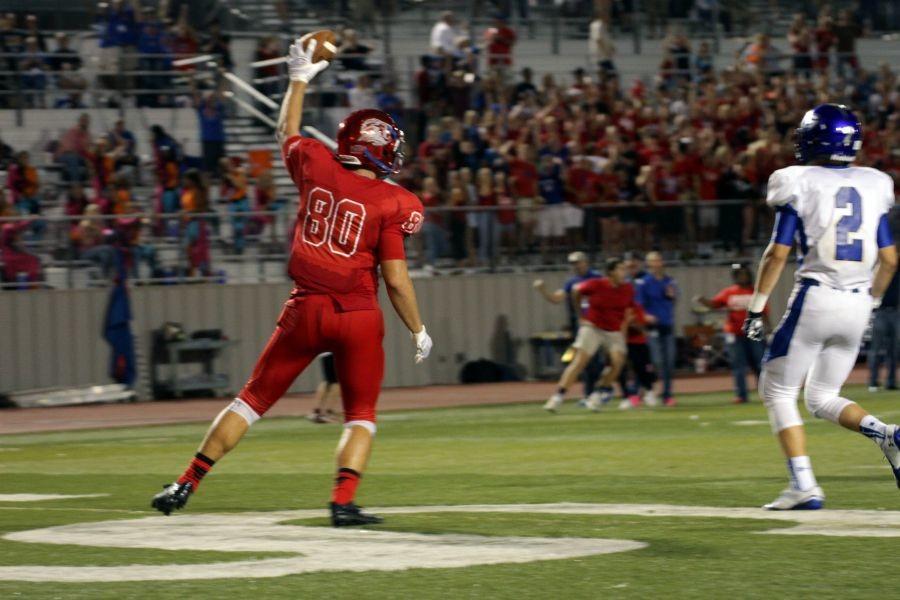 Senior Michael Berry celebrating after scoring a touchdown from a Hail Mary pass. The pass came from 4th and 33.

In a back and forth matchup between offense and defense on both teams, the Lions (2-2) took away the victory and snapped Georgetown’s (3-1) undefeated streak with a score of 34-24. On Saturday, they were named the Texas Army National Guard Team of the Week by ihsfan.com. Changing up their look a bit, the Lions were clad in solid red uniforms and chrome red helmets for a game touted as the “Red Alert.”

“[The atmosphere] was the best thing I’ve ever experienced,” junior quarterback Parker McNeil said. “The love from students, parents and the community is extremely unique here at Leander.”

On the first drive of the game the Eagles scored, taking an early 7-0 lead. The Lions answered with junior Kyle Murdock’s 20 yard field goal. At the end of the first quarter, the Lions trailed 7-3.

“I felt confident in my team to go out and do their job and put me in good field position to put points on the board,” Murdock said. “And win us a football game.”

With 5:59 in the second quarter after strong stances from both defenses, junior quarterback Parker McNeil ran for a touchdown to put the Lions in the lead, 10-7. McNeil finished the game 14/22 pass completions for 219 yards and two passing touchdowns as well as one rushing touchdown.

“I just did my job,” McNeil said. “But I couldn’t have done it without my teammates.”

On the next Eagles drive, senior Isaiah Turner intercepted a pass after it was batted by senior Nick Patek. On Georgetown’s next drive the Eagles turned it over yet again with a fumble. McNeil then threw a touchdown pass to senior Ty Worthy extending the Lions lead to 17-7 at the end of the half. Worthy carried the ball seven times for 83 yards and one receiving touchdown.

“I feel great,” Worthy said. “The defense was fighting hard the whole game. It’s always good to see how hard all us boys will work for each other. Everyone pushed each other hard this week and that made a big difference on our attitude towards the game.”

At the beginning of the third quarter, the Eagles scored a touchdown, making the score 17-14. On their next drive the Eagles scored again, earning the lead 17-21. Worthy then carried the ball for 67 yards down to the Georgetown 13 yard line. After a series of flags that backed the Lions up, McNeil threw a deep touchdown pass on 4th and 33 to senior tight end Michael Berry to take the lead again, 24-21 at the end of the third quarter.

“I knew that we needed to score,” Berry said. “When the play came in, I knew it was coming to me because of how the defense was lined up. So I knew I had to catch this ball no matter what. To top it off, I took the ball from the defensive back, which was pretty great.”

That play is among the nominees for the Time Warner Cable Sports Play of the Week.

“I was so excited,” McNeil said. “I gave Michael [Berry] a shot and he made an outstanding catch. He just wanted it more than they did.”

Georgetown then tied the game making it 24-24 with 11:09 to play. On 3rd and 20 McNeil passed again to Berry for a 71 yard completion, putting the ball on Georgetown’s 27 yard line. Berry finished the game with five catches for 130 yards and one touchdown.

The Eagles defense stepped up stopping the Lions short of a first down, and Murdock’s field goal attempt from Georgetown’s 20 yard line was blocked. After a stalled Georgetown series, senior Matthew Long scored a rushing touchdown to put the Lions up 31-24 with 3:15 to go.

“It feels great [to win] again, especially winning our district opener,” Long said. “We played way better than last week [against Rouse]. I’m proud of my teammates and I last night. We played great, but we still aren’t at the standard where we can be. I believe we can get there though.”

After a defensive stance that stalled the Eagles and turned the ball back to the Lions, Murdock kicked a 29 yard field goal, closing the game off at 34-24. Other defensive stats include two sacks by junior Luke Owen and a fumble recovery by senior Cameron Paxton.

“The feeling was phenomenal,” Murdock said. “Getting to seal the win for my team and start district play off 1-0.”

The Lions will visit another undefeated team the Vandegrift Vipers (4-0) next Friday at Vandegrift. They defeated Eastview 45-13 this week.