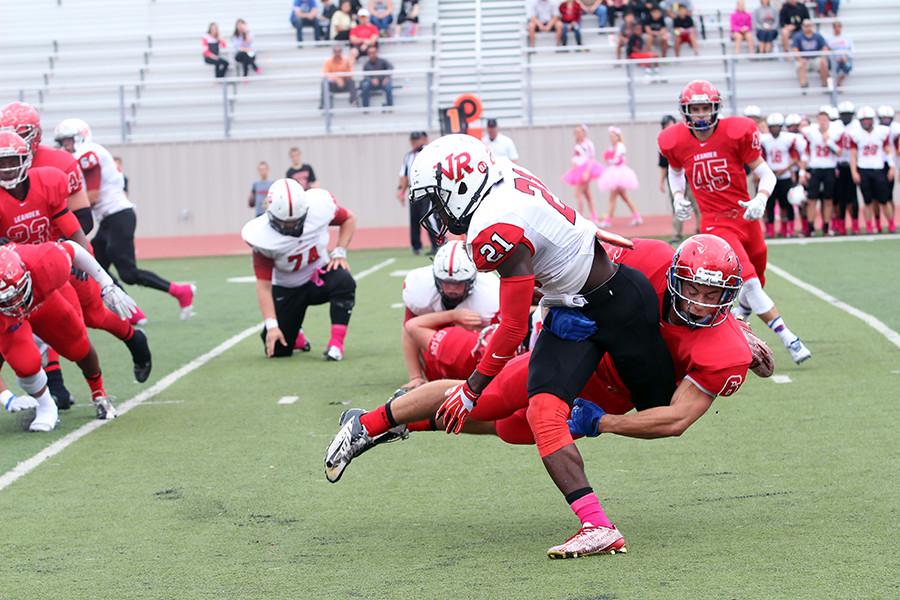 After weather conditions moved the Senior Night game against Vista Ridge to Halloween, the Lions lost the game by a score of 27-57.

“It felt great [to play my last home game], but sad at the same time, and I remember just like it was yesterday practicing for the first time as a Lion as a freshmen,” senior Matthew Long said. “I’ll never forget it.”

In the beginning of the first quarter, Vista Ridge scored early, leading 7-0 in the first 4 minutes of the game. After a few stalled drives from both sides, the Rangers scored again, leading 14-0 with 1:48 remaining in the first quarter. At the beginning of the second quarter, senior Ty Worthy scored a touchdown off a pass from junior Parker McNeil, putting the Lions on scoreboard. Worthy also ran for 24 yards in the game. After a missed PAT, the Rangers led 14-6. After another score from the Rangers, Long scored a rushing touchdown making the game 12-21 with 6:22 remaining in the half after a blocked PAT.

“We expected a good game, and good competition [from Vista],” Long said.

Towards the end of the first half, Worthy scored another rushing touchdown to close Vista Ridge’s lead to 2 points. After a Rangers score, the half ended with the Rangers leading 28-19.

“The first half we did pretty good,” Worthy said. “Coach Smith told us to expect to be down in the second half, but we could come back. I think we lost some scheme players, [and] they kind of messed up the flow, but we had some guys really step up and play.”

At the beginning of the third quarter, the Rangers scored a touchdown progressing their lead to 19-35. After another Rangers score, Vista Ridge led 43-19 with 1:50 remaining in the third. After a Rangers score, the Lions had a stalled drive, then Rangers scored again putting their lead up to 57-19. On the Lions’ next drive, the refs called a turnover on downs, even though it was actually third down. On the Rangers’ next drive, the ball went over the punter’s head and into the endzone for a safety. With 2:24 remaining in the game, the Lions were down 57-21. On their final score of the game, Garcia scored a running touchdown putting the Lions at 57-27 at the end of the game. Garcia also rushed for 71 rushing yards.

“We are going to go back to the basics this week against Drip,” Worthy said. “We don’t doubt our ability at all. We are going to just go simple and move the ball.”

Halftime note: The Blue Belles performed “Welcome to the Jungle” at halftime and then there was an impromptu dance off with Mr. Anderson serving as DJ. The weather also prevented the band from attending the game as they had Bands of America (BOA) competition in San Antonio, where they marched in exhibition.