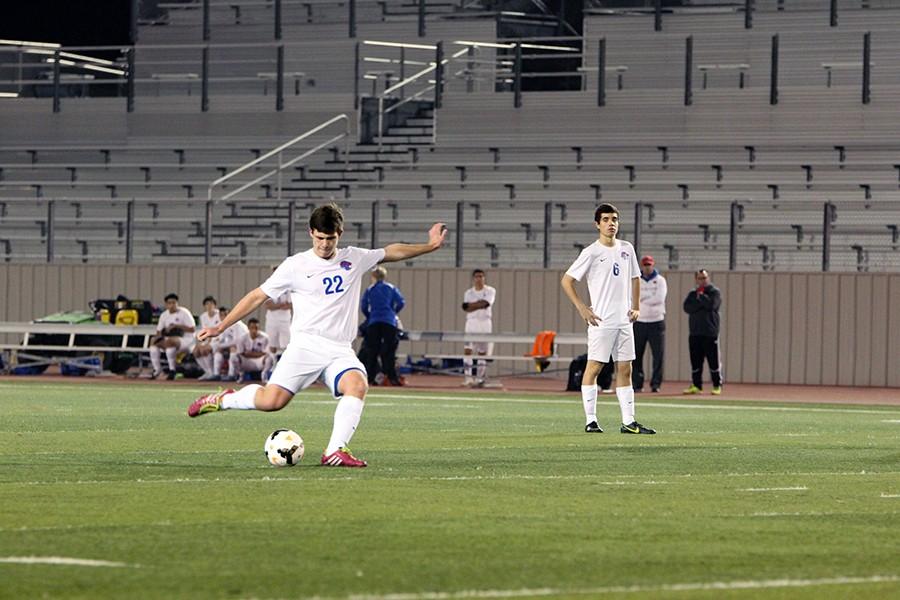 Junior Ian Milne takes a free kick outside of the box. Milne plays center back but takes most free kicks.

The varsity soccer team took on the Rouse Raiders at Bible stadium to kick off their season on Friday night. The game ended 0-0 after a last second call.

“We worked hard at practice which led us to work hard on the field and give it our best,” freshman Isaiahz Soria said. “At practice, we give one hundred percent when we try and accomplish our goals to become the greatest soccer players.”

The Raiders started with the ball in the first half and little major goal scoring chances were created by either team until the end of the half. After a ball was hit over the top of the defense, freshman Carr Panetta controlled the ball under the rushing Rouse goalkeeper and shot, but missed wide.

“I think our team did best in the defensive part of the game,” senior Ruben Gonzales said. “I think we did well against Rouse Friday night but we learned a couple of things from that game.”

After halftime both teams came out trying to control possession and push for the goal to win the game. Both teams had chances and both set of goalkeepers had saves to make. With six seconds left in the game, Rouse won a throw in by the Lions’ 18 yard box, took it quick and the ball was shot into the goal right as the buzzer sounded. While Rouse celebrated the referees decided it was no goal and the game finished scoreless.

“I think we had good chances to win the game and put it away,” sophomore Cole Bolero said. “We need to fix our mistakes and get onto the next game.”

The varsity boys will play Akins next at the Burger Center on Thursday.