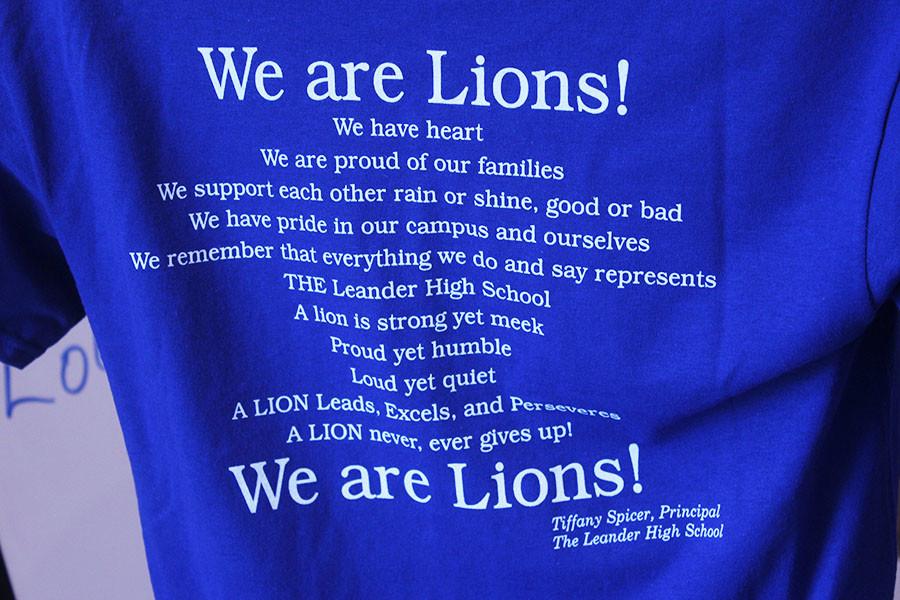 One of the t-shirts that are available at The Pride with Ms. Spicer's quote from her graduation speech. Other t-shirts include class shirts and spirit shirts.

Vending machines begone! The nook between the band hall and athletics hall is now the site for the new school store, The Pride. Due to the change of location, students can now grab food and drinks on their way around campus. Though it opened at the end of the last school year, it is now an official part of the school.

“The opportunity to just have the store is exciting,” senior Aslynn Wand said.”It’s been gone for more than ten years.”

Fresh cookies will be available along with spirit wear, class t-shirts, drawstring backpacks, lanyards and school supplies. All items are under $25.  One shirt in particular is special.

“Our best seller is this shirt,” business teacher Ms. Groomes said. “What it is is quotes from Ms. Spicer’s graduation speech.”

Members of DECA and students who apply and are part of Ms. Groomes’ 7th period class make up the store’s staff. Students will get the opportunity to learn more about business first hand. Current members are junior Frances Venditte, senior Jennifer Munson, and senior Aslynn Wand, who are supervised by head of business department and CET department Ms. Groomes. Proceeds from the school store will benefit the DECA group.

“Students will learn how to build a business from the bottom up. It was Ms. Spicer’s idea,” Ms. Groomes said. “Students can join the staff by applying, joining my 7th period class, and joining DECA.”

The store will officially be open between the 2nd and 3rd weeks of school but will have a table during the Lion Camp orientations. Class t-shirts, drawstring backpacks, and lanyards will be sold during orientation. During the school day, the store will be open in the mornings, Pride Time, 7th period lunch and after school. After school, the store will not be open until 15 minutes after the bell. There is also a possibility of an online extension of the store sometime in the future.

“I think it will give more pride in the school,” Wand said. “It gives more choices for certain clubs as well.”