Election over a year away but race has already begun 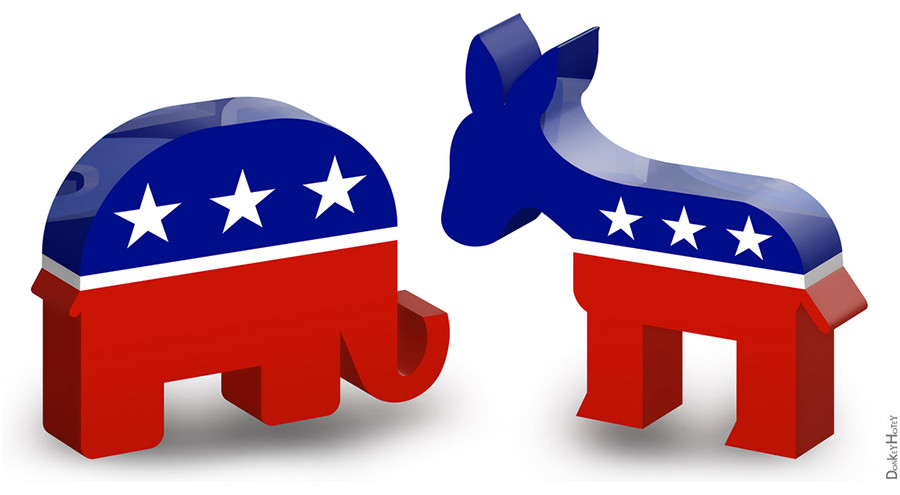 The Republican mascot, the elephant, and the Democrat mascot, the donkey. These are the two major political parties in the United States.

While the US presidential election is over a year away all sixteen primary candidates are campaigning in full force. There have been two Republican and one Democratic debate so far. Leading the Republican race is Donald Trump polling at 30.18% with Ben Carson in second at 20.18% according to Republican-Candidates.org. Leading the Democrats is Hillary Clinton at 49.8% with Bernie Sanders behind her at 25.1% according to the Huffington Post.

With Donald Trump leading the Republican race but there have been many concerns about his personal life added to the support for Trump as a politician. He has called Mexicans coming over the border rapists, criminals and drug dealers. He has called comedian Rosie O’donnell ugly inside and out. This and many other comments and actions made by Trump have left some questioning whether he would be a good choice to represent our country. Before politics, Trump was a well known public figure. He aired on TV shows and is a businessman with a net worth of $4.5 billion according to Forbes. He has shown support for cutting education spending, tightening immigration, and creating a larger military. He has been against gun control, same-sex marriage and abortions according to OnTheIssues.

“I think that schools are underfunded as it is,” sophomore Jeremy Kracy said.  “I think that the president should increase school funding for things such as extra-curricular activities.”

Carson is behind Trump in second place for the Republican nomination. Carson is a professor of oncology, pediatrics and neurosurgery at the University of Michigan Medical School, and previously he was a neurosurgery director at John Hopkins Hospital. He is in support of gun ownership, expanding the military and school choice. He is against same-sex marriage but not homosexuality, abortion and higher taxes on the rich.

“I think we should expand our military,” sophomore Brynn Minter said. “We need to protect our citizens and other country’s citizens better than we are now.”

Hillary Clinton is leading the race for the Democratic nomination. She has been a politician since she got out of college. Her husband, Bill Clinton, was the US President in 1993, she was a senator for New York from 2001 to 2009, ran for the US presidency for the first time as a woman against Barack Obama for the presidency in 2008 and since then has been the United States Secretary of State. She supports abortion, same-sex marriage and gun control. She opposes stricter punishments for crime, giving pathways to citizenship for illegal immigrants and green energy.

“I think having stricter punishments for crimes would help our society,” sophomore Taylor Bode said. “If we punish crimes harder people will be less willing to do it again.”

Bernie Sanders is second in the Democratic race. Sanders has been a politician in office since 1981 as a Mayor, Senator and member of the House of Representatives for Vermont. He supports abortion, same-sex marriage and gun control. He opposes God in a public sphere, stricter punishments for crime and expanding the military.

“I don’t think God should be supported by the government in schools or in public spaces,” sophomore Bryce Trinkle said. “We can’t support one religion more than another because that’s breaking the 1st amendment.”

The next debate will be for Republican Party on Wednesday, October 28, and they will nominate their candidate for the presidency on July 18, 2016.

The Democratic Party’s next debate will be on November 14 and they will nominate their candidate for the presidency on July 25, 2016.

“I hope that our next president will be able to provide proper education for all the students in the US,” sophomore Jessica Trevarthen said. “Fortunately, our school has even been able to provide personal laptops for a majority of students, but many schools struggle to provide essentials like desks and textbooks.”