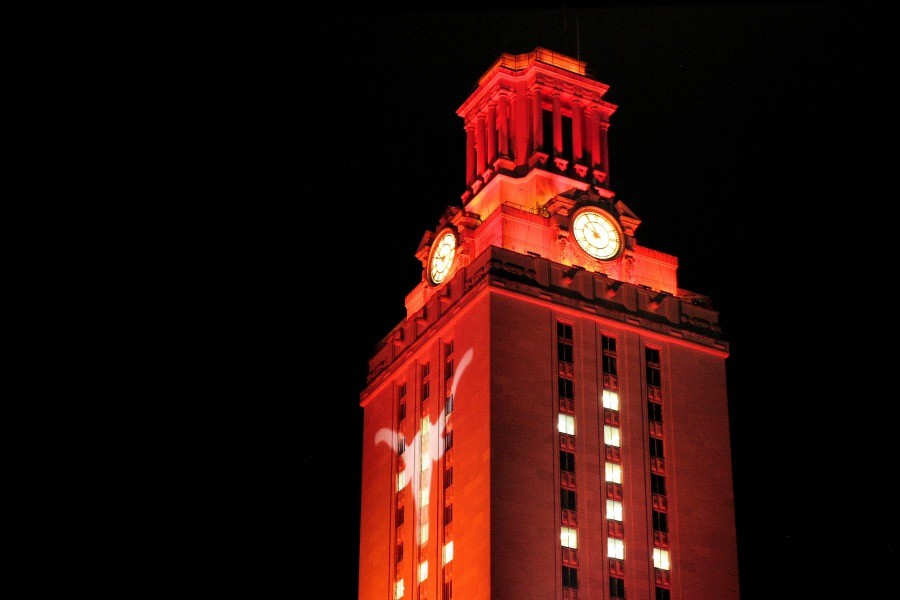 The main tower of UT Austin lit up for the graduating class of 2013. There is talks with the White House to make the advice available at a national level.

The University of Texas Police Department will be responding to sexual assault cases on a victim-centered approach with a blueprint created by the university’s Institute on Domestic Violence and Sexual Assault. The blueprint asks to keep looking for corroborating evidence by looking through social media and phone records and to investigate even if the victim revokes their statements. It also recommends to interview victims multiple times in order to get their statements at the victim’s pace. This was created in the aim to build trust between police officials and victims of said crime.

“I think they should spread awareness to all students about how serious sexual assault is,” senior Trey Karnes said. “I also agree that other schools should adopt the approach, that way there is a set way in how to deal with that sort of crime.”

The document is around 170 pages and is the first of its kind.

“I would feel safer [with this implemented],” senior Carolyn Plein said. “Knowing that you have the resources is reassuring.”

There is also discussion with the White House to make it available on a national level. They were one of the four campus’ picked to help end sexual assault on campuses.

“Yeah [it should be available to other schools],” Plein said. “I think sexual assault is a big problem in other schools and so this would help people feel safer.”

She also shared her thoughts on the blueprint.

“I would feel safer,” Plein said. “Knowing that you have resources is reassuring.”

A study by the Association of American Universities show that roughly 23% of women are sexually assaulted on college campuses, though less than that percentage are being reported to college police departments.

“Yeah [other schools should use this], so that the victim’s aren’t just silenced by the campus,” freshman Stacy De Gorostiza said. “This will really help people address the issue.”