The protest heard around the world 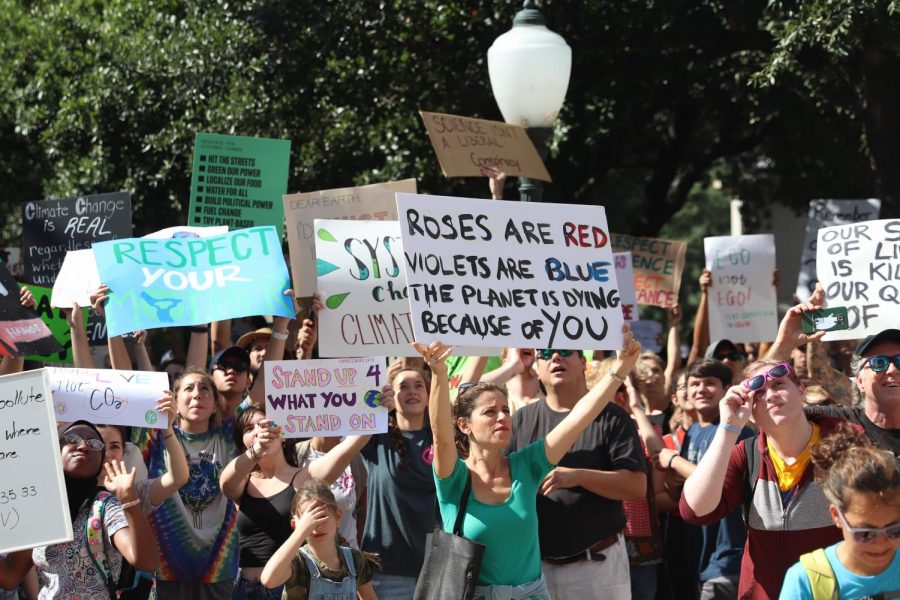 On Sept. 20, both sophomores Sally Musial and Rojan Gurbuz, and juniors Arden Larson and Jacob Bruce attend the Climate Strike at the Texas State Capitol. Over a thousand people from around Austin attended this strike and voiced their opinion on the situation at hand. “We all about lost our voice screaming when the speakers came to make speeches about the issue,” Bruce said. “It was really inspiring knowing that there are others who aren’t afraid to stand up to authority in order to make a difference.”

by McKenzie Henningsen, Co-Editor in Chief

This past Friday, Sept. 20, a crowd of thousand or more students and other protesters gathered at the State Capitol to add their voices to the worldwide “Climate Strike,” meant to call attention to the global climate crisis and other environmental issues.

To the tune of Nelly’s famous song “It’s Hot in Herre,” four Leander High School students chanted “It’s hot, it’s hot out here, there must be some carbon in the atmosphere.” Students throughout the Austin area led the strike, inspired by 16-year-old Swedish activist Greta Thunberg, and was meant to call the government to make a change to the polluting practices of large businesses and corporations. Sophomores Sally Musial and Rojan Gurbuz, and juniors Arden Larson and Jacob Bruce attended the rally.

“We started chants about corruption and pollution and how the government can’t keep ignoring the growing crisis,” Bruce said. “As we got louder, more people showed up. I didn’t expect as many people to participate, so to see all of us come together despite all our differences shows us a glimpse of what we can do under a united cause.”

Larson said there were main organizers and influencers rallying people with chants and speeches, like “No more coal, no more oil, keep your carbon in the soil.” Businesses like Lush, who is very apparent in their support of changing climate policies, were handing out free bath bombs and other products. Other people were attempting to get protestors to sign petitions for things like ending the building of oil access pipelines.

“I definitely think it has put more pressure on many governments, both state and federal, and petitions have gained more support,” Larson said. “It’s hard to judge the impact of such a fresh global movement, but I definitely think the renewed interest in renewable energy will push governments to cleaner energy solutions.”

Along with Austin, there have been strikes in 162 other countries, with over 4 million people participating worldwide. These young students, along with other activists of all ages, chanted “We are the future, the future is now, be the future, we’ll show you how,” in a repetitive manner while swinging their fists in the air.

“Being able to witness everyone at the rally and join together to reinforce our voice and demands for climate action gave me hope that we could do something about the climate crisis,” Sally said. “It was empowering to see so many people in Austin, and around the world, stand together and take action.”