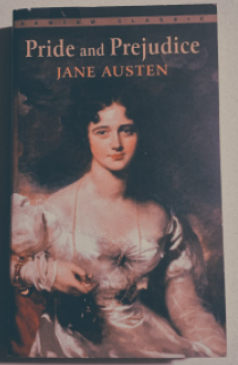 Angst, agony, and awkwardness: all elements of the iconic book Pride and Prejudice. Written by Jane Austen in 1797, Pride and Prejudice focuses on Elizabeth Bennet, the witty and charming daughter of an English country gentleman. As the second of five daughters, Elizabeth and her sisters were constantly told they had to marry rich to live comfortably. However, the cynical Elizabeth isn’t quite keen on that. Especially not when her first meeting with Mr. Fitzwilliam Darcy gets off on the wrong foot, and rightfully so. When a man says you are “tolerable but not handsome enough to tempt [him]” (Austen 2), you have every right to be mad.

Throughout the novel, I couldn’t help but feel like Elizabeth was being a whiny brat. At times she prides herself for not being prejudiced, but she is just as prejudiced as any of the other characters. Mr. Darcy is far too proud at the beginning of the novel. He feels the need to insult Elizabeth’s looks in order to feel superior to her. Besides the characters, if you are not a fan of “old-timey” literature, Pride and Prejudice may be a tough read for you. The language is difficult to understand at times, and you might have to reread it multiple times in order to understand anything.

But while the characters do start off annoying, their character development is off the charts. Seeing two people put aside their differences and fall in love is one of the most beautiful things in life. Austen does a terrific job of portraying the awkwardness between the soon-to-be-couple. Darcy and Elizabeth’s mannerisms and relationship reminded me of every middle school couple. Their interactions are humorous to the point that you can’t help but laugh out loud.

Although the book may be hard to read at times, the interesting dynamic between the extroverted Elizabeth and the introverted Mr. Darcy will make you smile the entire time you read. Overall, I give this book 4.75/5 stars.