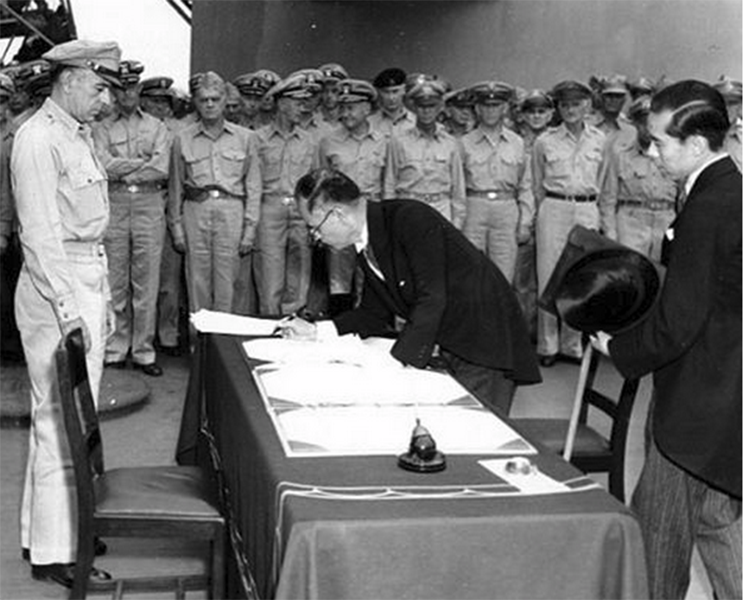 Japanese official signs the surrender papers on the USS Missouri on September 2, 1945.

70 years ago today the leaders of Japan formally surrendered to the Allies, officially ending World War II against the Axis powers: Japan, Germany, and Italy.

On December 7, 1941 the Japanese attacked the naval base in Hawaii called Pearl Harbor. This inspired Congress to declare war on Japan and Germany. Almost 400,000 American soldiers died throughout World War II but on September 2, 1945 4 years later on the USS Missouri Japanese officials surrendered to the United States.

Now after 70 years so much has changed. Germany is now the richest country in Europe and fourth richest in all the world while Japan is second richest in Asia and is the third richest in the world. After World War II Germany had to pay Greece 115 million marks which is an equivalent of 66 million dollars. Now Germany is again giving Greece money but this time it is because they are so wealthy and Greece is so far into debt. We currently owe Japan more money than any other country in the world. Like Japan and Germany the war helped our economy as well.

“America is more prosperous now because of the employment, manufacturing, and infrastructure we needed to create for the war,” AP World History teacher Mrs. Johnson-Petrine said. “The issues from World War 2 have turned out to be benefits to help make us the rich and powerful country we are now.”

Thousands of tourists travel to Japan and Germany year after year for business and tourism. Germany and Japan are the 7th and 12th most visited countries by Americans according to a poll on the website The Expeditioner. I’ve been to Germany twice and you would never be able to tell the most bloody war in history occurred here. One year ago, I traveled there and visited Dachau which was a concentration camp during World War II and when we told some local people we were going to visit there they were so shocked and almost in horror. It’s because Germans have tried so hard to forget about that embarrassing part of their history. Despite their past history the world has moved on and these places are still top tourist destinations worldwide.

Much has changed and happened since today 70 years ago on September 2, 1945 when World War II finally ended, but the most important is that we are still at peace with all of these world powers.“Across seven decades,” President Barack Obama said during a conference with Japan. “Our nations have become not just allies, but true partners and friends.”