How to keep up with those resolutions you made 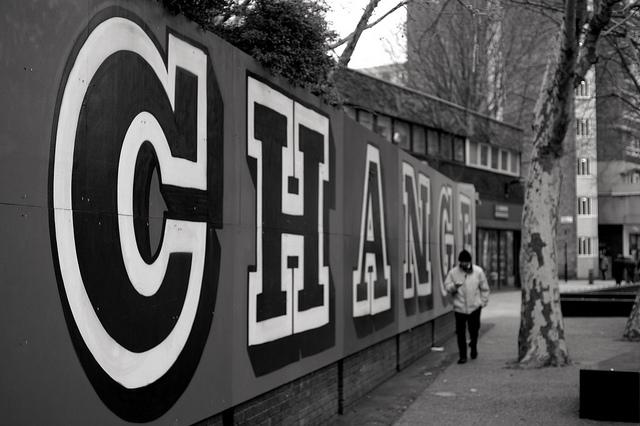 Change mural photographed by Nana Agyei. Many people make New Year's resolutions like goals that they try to achieve during the year.

The first earliest record of New Year’s celebrations dated back 4,000 something years in ancient Babylon.

Their celebrations would last for eleven days, during which the new king would be crowned, gods would be imprisoned and praised and mock battles would ensue. Obviously, a lot of things have changed in between then and now but it’s interesting to see just how much New Year’s traditions have developed. Today, all across the world we have different customs that happen on December 31st. In Spanish speaking countries, many citizens eat a dozen grapes before the clock strikes twelve, meant to signify good fortune for the next twelve months to come. In Sweden and Norway, the residents will eat rice pudding with an almond hidden inside, and whoever finds that almond is meant to have a prosperous future. An American tradition of eating black eyed peas stems from a belief that the beans kind of resembled coins, and that by eating them, one would gain fortune and luck in the New Year. While New Year’s celebrations are diverse across the world, there is one thing that remains constant. New Year’s resolutions.

For those of you who don’t know, this is when a person makes a promise or sets a goal for themselves to accomplish in the New Year. Most of the time, these don’t pan out the way we want them to. The hopes of eating healthier or working out more disappear over time as life takes its course. It’s not as if these things are intentional, they just happen. The question is, how do you stick to your New Year’s resolutions? Well, according to dietician Abigail Wilson, the key is small baby steps.

A lot of the time people want to jump full into their goals, and set expectations for themselves that would be insanely hard to achieve. This can discourage the person, and make them believe that it’s impossible, so they just return to what they used to do and don’t make that big of a change. If you take smaller, more manageable tasks you can make a bigger impact on your life. Want to lose weight? Instead of setting an ‘I want to lose 10 pounds in a week’ goal, start saying ‘I’d like to work out at least twice this week’ or ‘I’ll only eat my favorite junk food after I go for a run’. Maybe your goal is more aimed towards your personal life. Don’t think that your entire personality is going to transform in a short period of time. Change takes time. Make a small goal for the day, like “I’m going to smile at someone I don’t know today.” That way you aren’t setting yourself up for disappointment.

The most important thing to realize is that sometimes you aren’t going to get exactly what you want out of your resolution, but that you shouldn’t beat yourself up if you don’t.