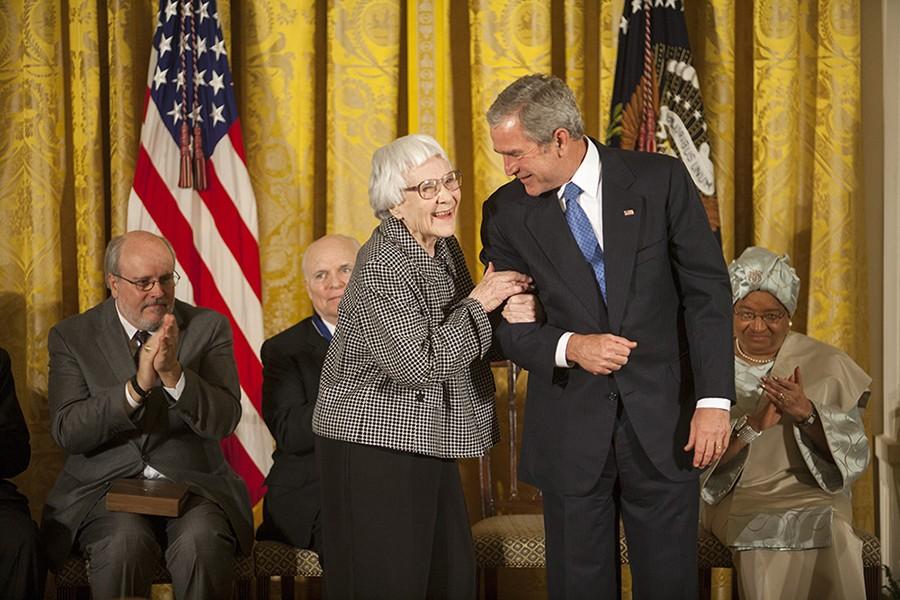 President George W. Bush shares a moment with author Harper Lee Monday, Nov. 5, 2007, prior to presenting her with the Presidential Medal of Freedom during ceremonies in the East Room of the White House. Photo by Eric Draper, Courtesy of the George W. Bush Presidential Library and Museum

When I picked up To Kill a Mockingbird, I couldn’t imagine the impact it would have on my life. My eighth grade English teacher handed us a list of pre-picked novels and told us to choose one, then to analyze and write a paper on one of its characters. Harper Lee’s novel, To Kill A Mockingbird, is the one that for some reason stood out to me. After reading the first few paragraphs, I knew that this was a story that I would take out of the classroom and continue reading into the late hours of the night. It’s protagonist, Scout, is a six year old white girl living in the south during the 1920’s that resembled my personality so closely I was shocked. She was stubborn, loved to read, and talked back more than she should. She fought with her older brother constantly, yet still looked up to him, and didn’t  understand why the world was such a cruel place. For me, a 14 year old biracial girl who went to a school that was majority white, it was like meeting someone that I could finally relate to.

Scout’s struggle with the racism of her time related so much to my own, as riots like Ferguson were ongoing and Trayvon Martin was being mourned and I was combatting constant racism coming my way because others were uncomfortable with the fact that my white mother and black father produced me. As Atticus, Scout’s lawyer father, defended a black man falsely accused of raping a white woman, I saw the struggles he would still have today as police brutality and racial profiling are rampant countrywide. When Scout was upset over the black man’s conviction, and the injustice of her world, I sympathised with her pent up frustration and anger, having felt the same thing when a 12 year old black boy was killed for holding a Nerf gun. Harper Lee managed to write a novel that, despite being written over fifty years ago, was still personal to a young girl trying to figure out why people can be so cruel.

Lee’s novel isn’t important to only me, however. Published in the sixties, Lee did something with her novel that no other author of the time period did. She spoke the truth. Her book painted a picture of what the racist south would have looked like through a child’s eyes, and sent the message that racism was something that had to be taught. That children are not born with a belief that skin color determines a person’s status, intelligence, or quality as a human being. Her book was her medium for speaking out, and while it did not result in immediate action like Uncle Tom’s Cabin did, I am certain that it made each person who read it think a little differently about the way they acted, or the way the perceived others.

Harper Lee has undoubtedly impacted our country by helping change the way people think. When she published her book about racism in the 1960’s,  Civil Rights were being fought for. People like Martin Luther King were marching and protesting for equal rights in towns much like the one Lee fictionalized. She took a stand and helped the progress of equality in America. A quote from the book reads “(Courage is) when you know you’re licked before you begin but you begin anyway and see it through no matter what.” Lee certainly had courage to write a book that would challenge American morals at the time. Harper Lee was honest, and that is something that is valued and will be missed in authors today. Thank you, Harper Lee, for creating a masterpiece that will speak across time and continue to open the eyes of those who are able to understand it.