A breakdown of the second presidential debate 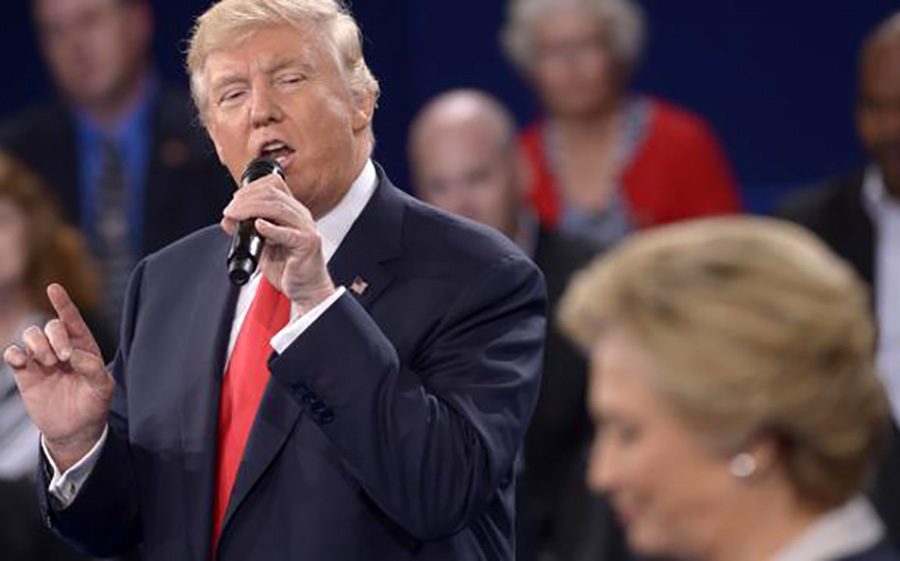 A picture taken at the second debate of the presidential candidates. This debate was called the ugliest debate in history.

Mock elections are coming up for students to elect their version of the president. Voting will begin on October 27th and students are being educated on what the candidates stand for. Their second presidential debate revealed a lot about the two and how they may do in the future for their final presidential debate October 19th.

This debate began with a topic that has been blowing up lately. Donald Trump’s lewd comments about what he wanted to do to females and what he could do because he was a star. However, he claimed it was just locker room talk.

Clinton repeated her statements of Russia hacking the United States and even said that they were trying to rig the election in favor of Trump(this fact is unclear.) Her performance lacked in number of attacks as was seen in the first debate, but was not a loss completely. Under Trump’s attacks she remained calm and un rattled which is what a lot of voters have favored about her performances.

Trump did improve his performance with this debate by not following Clinton into subjects that would hurt him further. Even though he managed to address the issues, the polls show him down on a national level. His campaign was deeply hurt by the release of the 2005 tape and many Republicans have left his support. He needed this win in the debate to stabilize his campaign, but many say he did not get it due to the fact of his many mistakes.

Trump claimed crime rates were the highest America had seen in half a century, but it turns out that crime rates this year are actually the third lowest in the past two years. He then went on to say that Hillary laughed at a rape victim, which was untrue. Trump was also caught on another lie when he said he didn’t tweet for people to watch a sex tape. There are also facts that Clinton got wrong, claiming that Trumps new tax plans would tax the middle class, but most of them will actually be spared. She also stated that the U.S was energy independent, which it is not.

The debate ended with both candidates having to say something nice about each other. Clinton commented that he had nice kids and their qualities and abilities reflect positively on him as a father. He said she is a fighter and admires her fight and perseverance. This contradicts with his previous claims that she doesn’t have the stamina to be president.

Both sides say it was a win for their candidates, but it was unclear. Trump did have a better time staying calm and addressing many issues, the moderators did a better job cutting the candidates off and moving on, and Clinton has remained calm in the face of her adversary. But this has been called over and over the ugliest debate in history. It started with no handshake and so many personal insults were thrown. Trump called Clinton the devil. It was the performance Americans have come to expect from this years nominees.