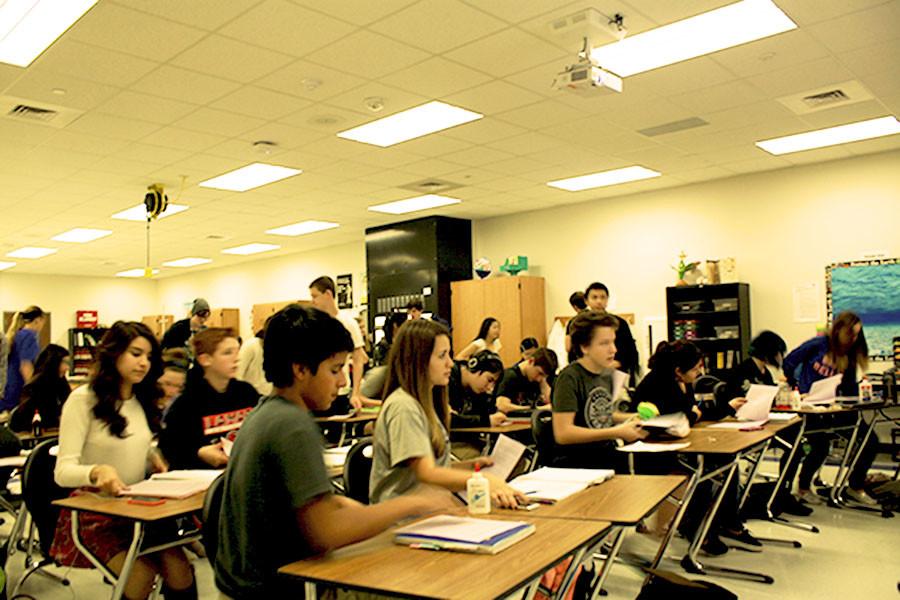 Students in an overcrowded class

From preschools to colleges, class size has always been an important factor in choosing a school.

Studies like the American Journal of Public Health state that if one lowered the class size in elementary that it would reduce most public health and medical interventions and be cost effective. It also states that a student is more likely to graduate from high school and be more healthy. A teacher who has a small class size loves how she can engage with the students, make them feel like they are not just a number and have more chances to connect with the students.

In this school though, overcrowding of classrooms is a problem. One class that is supposed to have 30 kids have 33, leaving three kids on stools instead of real desks. Another teacher who has worked here says that it doesn’t matter how good the kids are, if they are packed into a classroom, the teacher must have a discipline plan in place. In their 6 years teaching at this school almost all their classes are packed, with no class with less than 25 students. A regret of multiple teachers is that they cannot get more one on one time with students who maybe are struggling in the class. Another sadly says that they give the students independent work even though they know that most students don’t learn as much that way from them. They know that its not the school officials faults, but yet when asked, most of the teachers who has gone to the school officials were given no answer to the problem. A solution is needed.

Some will say that the school does not have the resources to reduce classroom sizes due to a lack funding available. A teacher with just a B.A will have a salary of $42,750 to $61,935, the schools budget is$178,455,636, even if the teacher had a doctorate they would only need .3% of the schools budget for their salary.

School officials’ such as the Principal Spicer say that Leander actually has it pretty good. She says that the district helps keep our numbers low and though the community is growing, the school will get some relief when the new high school opens in two years. Some teachers and students don’t look at the master schedule which is a very difficult thing to plan out, taking the whole summer and even up to the actual school year. The school officials are not a fault, this is a district issue.

This problem is a big one. with big class sizes and a possible solution for making this school a calmer place, is an increase of teachers at the school. In Florida, California and North Carolina, class sizes has been reduced. Texas should be added to the growing number of states who are reducing the numbers in their classrooms.