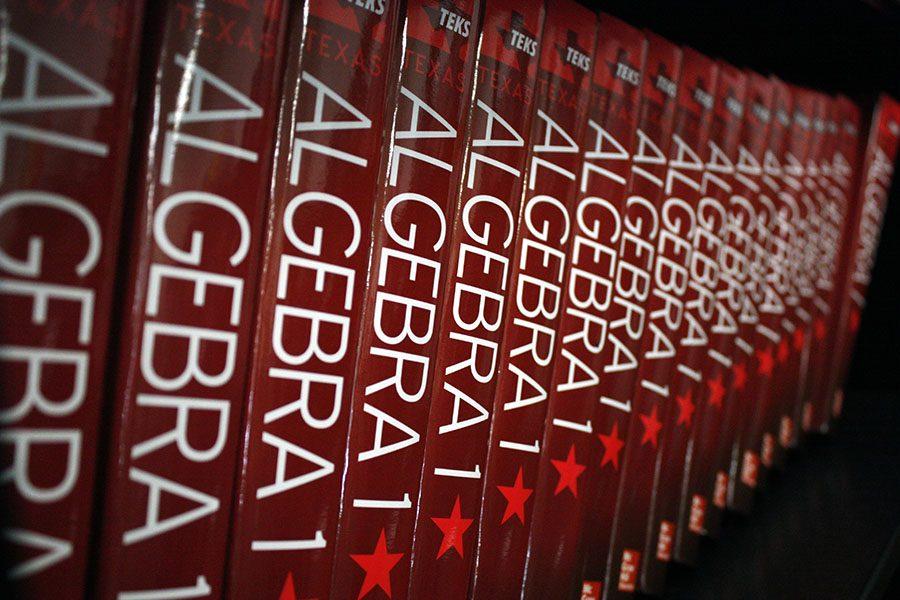 A row of algebra one textbooks. After taking this class as a high school freshman, it is retaken as a college freshman.

From the first year of Kindergarten, until the sophomore year of college, there are four things that student learning is centered around. Those things are English, math, science and social studies.

These are things that a member of society should be aware of, and it is good to know about whenever it is being taught in public school. However, when a student begins college and is paying thousands of dollars to learn one specific thing they are majoring in, there is no need for them to pay to take these four basic classes when they just spent 13 years of their life learning it.

It is a waste of money. One of the key differences in high school and college, is that in college, the students have their major. If someone is a math major or an English major, it makes sense for them to be in those types of classes. But for them to be forced to pay for and take a college level chemistry class, it is ridiculous.

With students having to take all of the intro classes that they don’t need, they have to get more student loans. This leads them straight to debt, for the most part. Whenever they graduate, it’s time for them to begin their lives, but how is someone supposed to start life off with $25,000, or even $40,000 in debt. The average 2016 graduate owed $37,172 in student loans.

In Texas, high school students are required to take Algebra 1 and Algebra 2. Then go into college and retake the same class. Re-shoveling the same information back into their brains leads to higher dropout rates, which leads to financial problems with students, parents and the state.

When all these students are dropping out of college after their freshman or sophomore year, it is thinning out the state’s money. It is also part of what is causing the high raises’ in college tuition fees. The possible root of this problem is the whole “everyone should go to college,” movement that is going on across the high schools of America.

The issues surrounding these topics could be helped with serious education reform. If in the past two years of a high school students career, they took the required math and English classes and adding on to taking Economics, they could take a class on how to be a functioning member of society, i.e voting, owning a house and supporting a family. This class could potentially count as a social studies course, so that the reform isn’t too hard hitting. This would help better prepare students who choose to go to college economically and socially.

Also removing the required freshman and sophomore years of college would help. This could potentially lower the dropout rates by making college seem less intimidating and it would cost less money to attend. This puts more money into the hand of the parents and future adults of America. It would reduce student loans as well.

There are a lot more issues that went undiscussed, but the key to most of them is some societal reform.