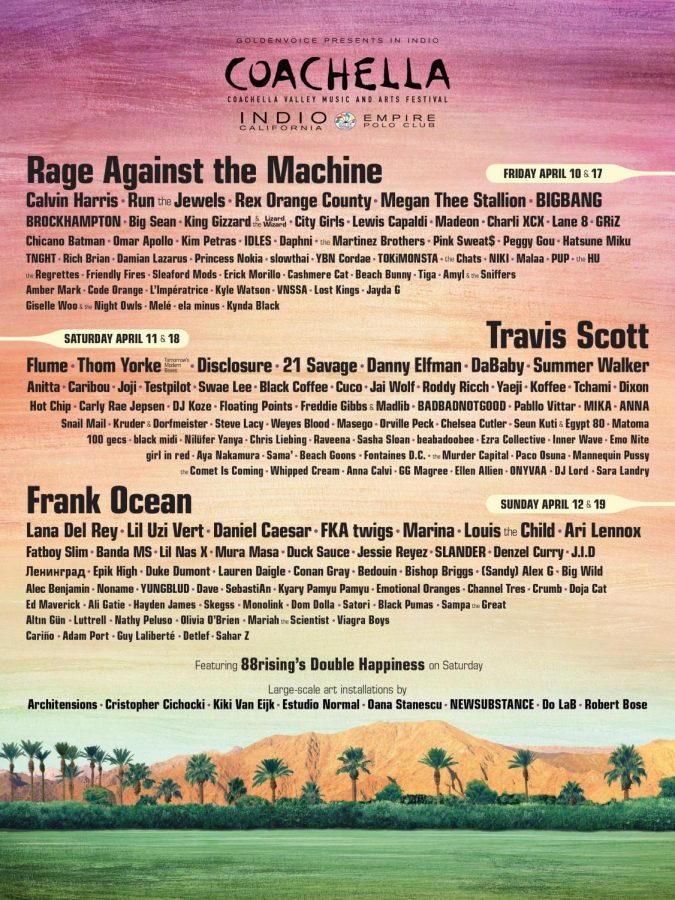 When the Coachella lineup was released for 2020, I was beyond speechless. It’s overflowing with unmissable talent and is a strong contender for the best Coachella lineup yet. The three-day festival will take place over two back-to-back weekends: April 10-12 and April 17-19. Wristbands on Coachella’s official website are currently sold out for both weekends.

One name shines the brightest: Frank. Ocean. I wish I had the words to string together to describe the complete and utter state of shock I went into when I read that name. I was convinced that I was reading another one of those fake lineups that consistently trick so many. But sure enough, after closing and reopening the official 2020 lineup many times, I realized that he’s actually headlining on Sunday of both weekends. Coachella is one of the largest music festivals in the U.S. and Frank Ocean tends to be a big homebody, releasing music sparsely and randomly. It’s not an exaggeration to say that he never plays live shows. The element of surprise is right up his alley, but the size of the crowds and overall vibe of Coachella is very much unlike him. Whether he knows it or not, he’s single-handedly selling those wristbands and just flipped his fanbase upside down.

Rage Against the Machine, an iconic heavy-hitting rock band who sings of revolutionary political views and social activism, is also set to headline both Fridays of Coachella. Rapper Travis Scott is headlining both Saturdays and the God himself, Frank Ocean, is headlining both Sundays. Although Lana Del Rey and Flume would not be sub headliners if I created the lineup, the headliners rightfully deserve their spots.

For the rest of the lineup, I’ve seen Brockhampton live twice, Denzel Curry, Daniel Caesar, Marina, Noname, Jai Wolf, Cuco and Koffee. Brockhampton blew me away both times I saw them with their beautiful chemistry and nonstop energy. At ACL 2019, I went backstage to see DJ Jai Wolf play his set and it was one of the most fun experiences I’ve ever had. Daniel Caesar’s voice is stunningly angelic and his sets radiate a certain kind of peaceful feeling. I’ve been a Marina (formerly known as Marina and the Diamonds) fan since middle school and her concert was everything I hoped it would be. She radiates empowerment and brings out the wannabe pop star in all of us.

Hatsune Miku, a completely artificial and online cultivated anime persona will make an appearance via hologram at Coachella. She is widely popular in Japan and has continuously sold out arenas there. Hatsune Miku’s software receives the user’s text commands and is therefore able to sing songs and speak phrases. Although it’s strange, I would feel compelled to see at least one song of hers.

If I was attending Coachella, I would obviously have to see the unmissable stars: Frank Ocean, Lana Del Rey and Flume. In addition, Disclosure, Mura Masa, Steve Lacy, Yaeji, Joji, Princess Nokia, Doja Cat, Hot Chip, Megan Thee Stallion, Snail Mail, TNGHT, (Sandy) Alex G, Swae Lee, Travis Scott, FKA Twigs and Charli XCX would also top my list. I’m almost 100% positive that if I saw Frank Ocean, Lana Del Rey and Flume over the course of a weekend, my soul would leave my body and I would transcend. From the bottom of my heart, I’d like to personally thank the Coachella lineup creators for this insane experience they have cultivated.

In a perfect world where I would have the means to attend Coachella, I’d be booking my plane ticket right now instead of writing this article. However, my state of unemployment, upcoming college tuition and accompanying expenses say otherwise. As much as it pains me, I guess I will have to settle for watching the live videos.