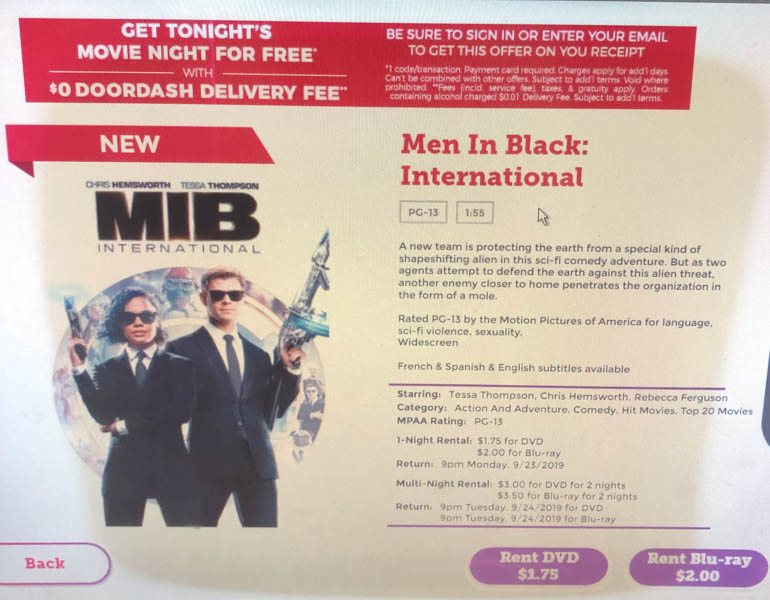 The movie Men In Black: International can be found for rent at the local Red box located in front of Walgreens.

After almost seven years the Men in Black series returns, Felix Gary Gray has brought us a new sequel. Chris Hemsworth and Tessa Thompson are brought to the screen. With a new spin on the alien universe and the Men in Black headquarters, Men in Black: International has gone beyond its expectations of being a cute extraterrestrial movie. It’s proved to have a surprising, suspenseful, and engaging story line beyond that of any video games and other cliche movies.

The Men in Black have always protected the Earth from the dangers of the universe, and in this new adventure they tackle their biggest threat yet, a mole in the Men in Black organization.

To save the universe,  Agent H played by Hemsworth and Agent M played by Thompson join forces. When shape shifting aliens arrive on Earth, H and M embark on an international adventure to save the agency, and planet earth, from their insidious plans.

Men in Black International revealed many new perspectives to the secret agency and mapped a brilliant pathway to the making of more characters and newly established relations between the aliens and humans. Often using the friendly chemistry of Thompson and Hemsworth to amuse and charm the crowd, the movie was humorable and related to modern society. The new twist put on the movie, and the new outlook on the Men In Black, make the movie both memorable and satisfying. It definitely was worth watching.

Overall, Men in Black: International is a fun ride from beginning to end. Despite a few flaws in the story line, it’s entertaining throughout. It brings a satisfying spin to the Men in Black universe, and leaves the viewers with a great impression on the series. It truly represented a great comeback with new character relationships, plot twists and newly established bonds. It earns a 4/5.