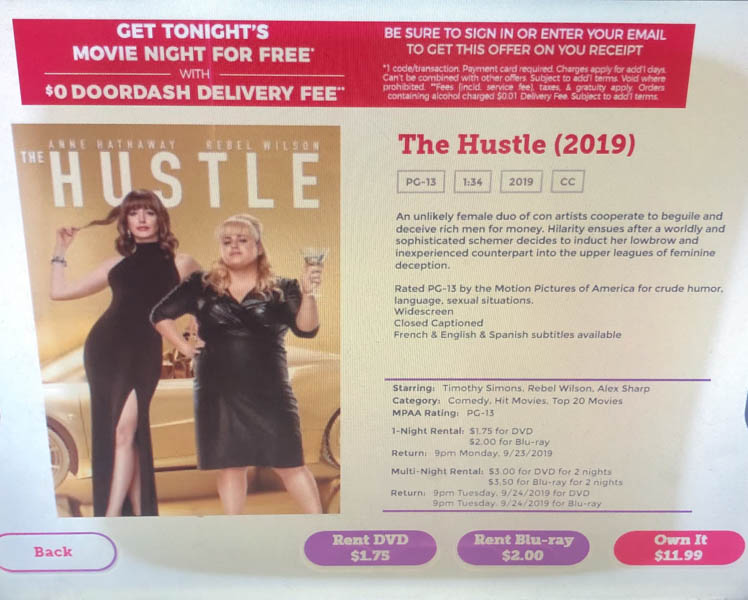 At the Redbox located in front of walgreens, the movie The Hustle is available for rent.

“The Hustle” is a scam comedy that takes place in French Riviera, with Anne Hathaway as an elegant British seductress who cons wealthy suckers the way they deserve to be, and Rebel Wilson as a disorderly woman who’s just as crafty. The movie is a remake of “Dirty Rotten Scoundrels” (1988), however now with Wilson and Hathaway who create a stylized collage of drawing-room class tension and mind games staged with mental precision.

Wilson and Hathaway have winning chemistry as a pair of con artists making their trade in a stunning seaside town in the south of France. Josephine Chesterfield, played by Hathaway, is a glamorous British woman with a lavish home in Beaumont-sur-Mer and a talent for conning gullible wealthy men. Into her neat, meticulous world comes Penny Rust, played by Wilson, an Australian woman who is erratic and fun-loving. Where Penny collects wads of cash by ripping off her targets in local bars, Josephine fills her safe with massive diamonds after deceiving her victims in glitzy casinos. Wilson’s talent for physicality and Hathaway’s intelligence are an unsurpassed combination as the pair of scammers pull out all the stops to ensnare a gullible tech billionaire played by Alex Sharp.

The movie leaves little to be desired and gives viewers a full glass of continuous laughter, contrasting emotions and full-on entertainment. Pairing Wilson and Hathaway together has proved to be a genius idea, where both have complemented each other’s personality in the film. Both actresses have given us the perfect outlook on the world of the tactical scammers and the rich and gullible. Whether having a girl’s night, hanging out with family and friends or chilling alone with everything in the kitchen except for the week-old pizza, this movie is sure to entertain people of all ages and categories. “The Hustle” earns a 5/5.