Adam Sandler delivers a performance of a lifetime 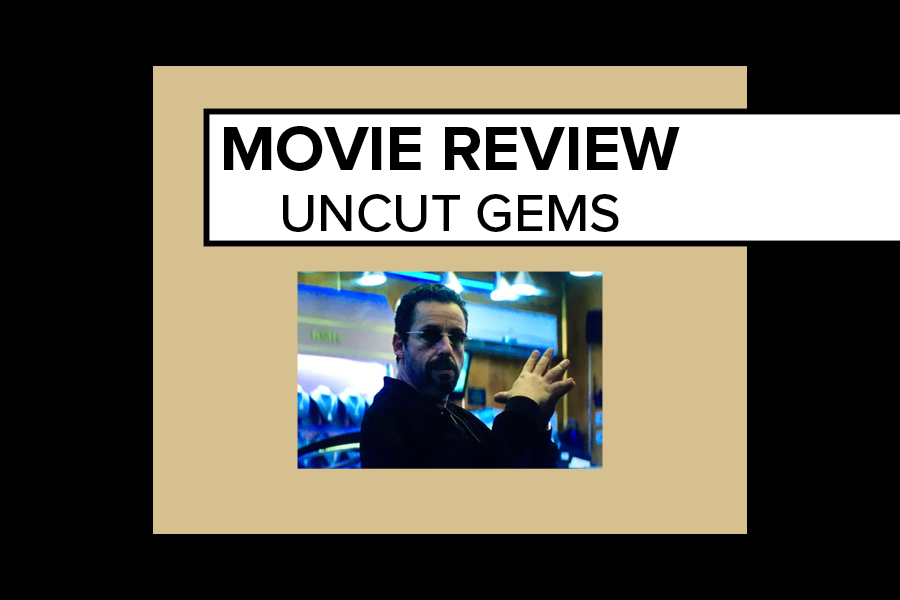 Uncut Gems has Adam Sandler star as Howard Ratner, a 2012 New York City jeweler who’s juggling his business, family life, unrelenting debt collectors, and an insatiable hunger to win big. He digs the hole deeper for himself when he lends out a recently purchased gem, worth over a million dollars, to basketball player Kevin Garnett, who believes the gem brings him good fortune. Brothers Josh and Benny Safdie direct this anxiety-induced thriller which was released on Dec. 25.

Maybe the most innovative directors working today, Josh and Benny Safdie have consistently shown the audience just how far tension can be stretched. From the parental stress of their directorial debut Daddy Longlegs to the redemptive search of crime-thriller Good Time, they have found every way to keep the audience on the edge of their seat, and Uncut Gems is no exception. It’s a nerve-wracking, downward spiral of greed hurtling itself towards a final moment which is done in such a fundamentally perfect way that I’m not even going to hint at it. It’s simply a thriller like no other, and even it’s obvious inspirations, like Abel Ferrara’s Bad Lieutenant, don’t have the pure angst built into the core of the narrative. The movie demands your attention and doesn’t let go throughout the entire runtime. Daniel Lopatin’s phenomenal score is already chaotic in itself, but the way it’s used makes it explode off the screen (or in this case, out of the speakers). I was surprised at the movie’s 53% audience score on Rotten Tomatoes until I read around and discovered the criticisms were mostly about the movie’s stressful presentation. Even if their movies aren’t your thing, it’s undeniable that the Safdies sure know how to make the audience sweat.

I don’t like Adam Sandler. I find his comedies to be repulsive, mindless garbage, but when paired with the right directors, he can give a mesmerizing performance. I love the expressive romance he gives in Paul Thomas Anderson’s Punch Drunk Love as well as his paternal warmth in Noah Baumbach’s The Meyerowitz Stories, but his entrancing self-righteousness as Howard Ratner is by far his best performance. I don’t think even my favorite actor Harvey Keital, who was considered for the role, could pull off the mythical, self-destructive nature of this character. Sandler embraces the role, and every one of his screams, shouts, and sobs make the experience all the more perfectly chaotic.

Both exhilarating and mystical, Uncut Gems is a hypnotic tale of greed and a thriller engraved with unrelenting anxiety that seems stylistically perfected by its directors. It’s a masterpiece, and quickly became one of my favorite movies ever. It’s on Netflix, and I recommend watching it as soon as possible if you haven’t already. Also, check out the Safdie brothers’ previous film, Good Time; another masterpiece, also on Netflix. Obviously, I’d give Uncut Gems a 10/10.