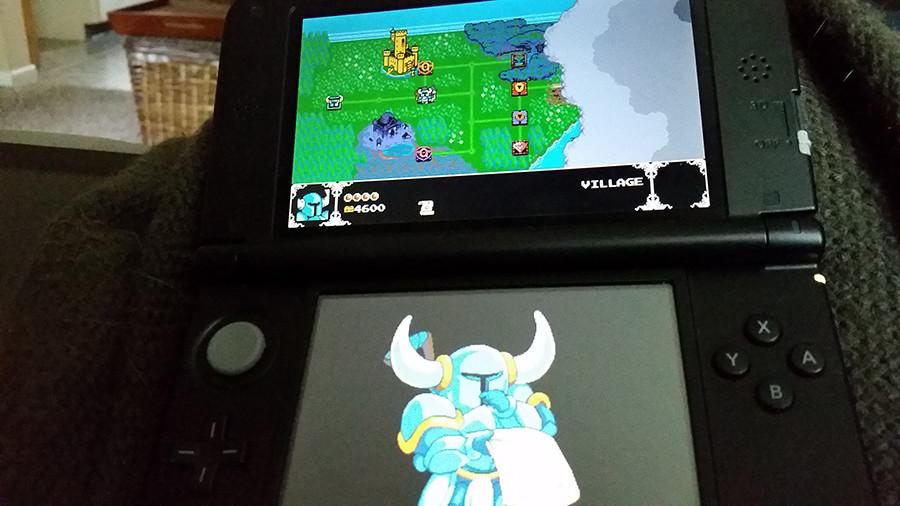 Shovel Knight on a Nintendo DS. Plague of Shadows is available on PC, Xbox, Playstation Consoles and Handhelds, and WII U and 3DS.

Shovel Knight was one of my favorite games of last year. It was a love letter to the 8-bit era, and it was a masterfully crafted one at that. With the success of the main game, Yacht Club Games planned three expansion packs, each based off one of the evil knights of the Order of No Quarter. The first one, released last month, is titled Plague of Shadows and follows the plague doctor of the group, Plague Knight. Its an amazing expansion to an amazing game earning itself a 5/5, need I say more?

The story is quite simple and easy to follow. Plague Knight wants a potion of ultimate power and to do so he must defeat the other seven knights in order to create it. Normally I’ll be up in arms with a simple story, but it’s like a time machine where old games didn’t have much story, so it serves it well. Characters hold an amazing charm to them like in the original game, and seeing Plague Knight act like a spaz is priceless.

With gameplay, it’s much like the original. Go right until you find boss, beat boss, rinse and repeat. That is, until Plague Knight’s original moves are added. His jump is less than the hero Shovel Knight, but he has a double jump and even a triple jump called a bomb blast to help him. You are also given free reign to design a bomb with its powder, casing, and fuse, mixing and matching them to create one that fits your playstyle. The game itself is also fairly challenging, making it satisfying whenever Plague stomps his competition into the ground.

The music is gorgeous. Wonderful tracks by Jake Kaufman make a triumphant return, with some new ones added into the mix. It’s a collection you’ll be banging your head to.

If I had to describe Plague of Shadows, I would say more of the same and then some. Rewarding gameplay, charming characters, and one of the greatest 8-bit soundtracks I have ever had the pleasure of listening to.