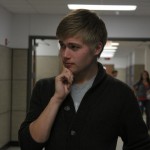 Music: Recently, I have been listening to a little indie band called Deerhunter, due to their soothing rhythms and chill, alternative vibe. With songs like Helicopter and Earthquake, this album is definitely on my top 10 best albums of all time.

Film: My favorite movie of all time is District 9 because of its originality and amazingly realistic action and dialogue. It’s a low budget, mainstream film that caught the world by surprise and has become a modern cult classic.

TV: My favorite television show is Flight of the Concords because of its intelligent kookiness and modern humor. The originality of the show is what catches the eye of most people, which makes it one of the funniest television shows of all time.

Book: My favorite book is 1984 by George Orwell. I just consider it amazingly advanced for its time and the anti-socialist themes are incredibly interesting, giving the reader a sense of the passion the author had for the subject.

Food: I have a passionate love for Middle Eastern foods, such as falafel and couscous. The flavor is distinct and exotic, and reminds of how much I would like to travel.