Battle of the Internet subcultures 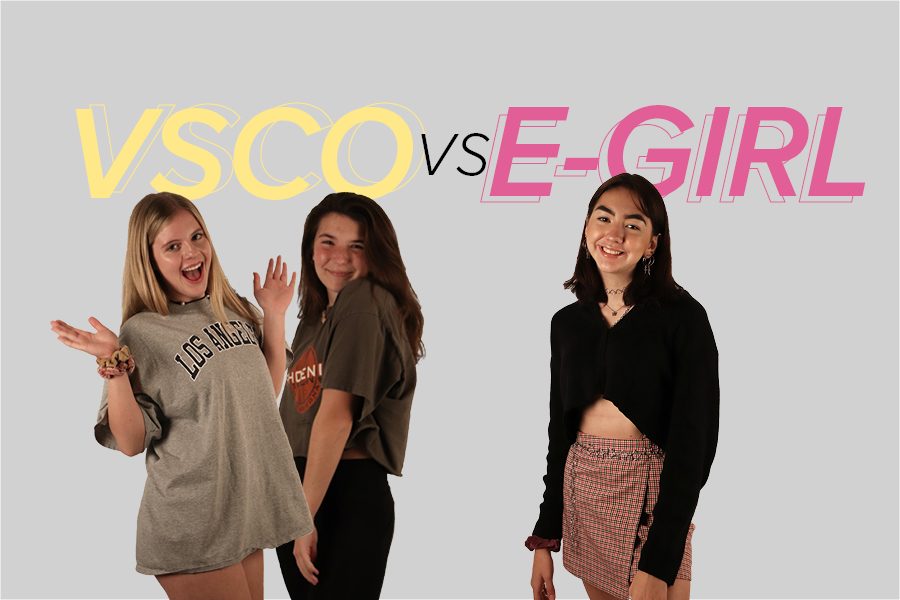 In the past few months, so-called VSCO girls and e-girls have been taking over the internet. With both being so vastly different but also equally trendy and powerful, the question has arisen, who is superior?

The term VSCO girl originated from a popular photo-editing app, VSCO. The app attracted a certain population of girls all following a similar aesthetic. However, according to VSCO girl junior Addison Porch, VSCO has since been abandoned.

“We don’t even use the app VSCO, it’s all on Lightroom,” Porch said. “VSCO? No one uses it. Lightroom’s where it’s at. You can make your own presets, and then you just apply them back over. I don’t know why people say VSCO, it’s Lightroom.”

For most, like NBC News, it seems that the trend is centered around looking as if you came off a beach in California.

“The key to making yourself a VSCO girl is an oversized t-shirt, shorts that you cannot see, Air Force 1’s or Vans,” Porch said. “As well as having a Hydro Flask and a metal straw.”

VSCO girls’ claim to fame has been through various environmental campaigns that have spread awareness to different issues like saving endangered turtles.

“We like having many good causes that we want to work for,” Porch said. “Now, the turtles they just blew up, but we’re also thrifting because we don’t want to support fast fashion. So, thrifting is [also] key.”

E-girls, however, are the polar opposite of VSCO girls. The “e” stands for electronic and emphasizes their strong social media presence, which has emerged through Instagram and TikTok. They are much less light-hearted than VSCO girls, and their style reflects that.

“I would say I do dress kind of edgy,” e-girl junior Leslie Townsend said. “I wear a lot of black, red and blue. Sometimes I can dress girly, but it’s still black. I go to Brandy Melville a lot and Dollskill. It’s just clothes that you won’t find everyone else having [and] clothes that you wouldn’t normally find.”

In comparison to VSCO girls, the e-girl culture is much more centered around their unique fashion than their morals.

“It took me a long time to find my style, but over time it’s developed and I dress differently every day,” Townsend said. “It’s just the only thing you can really personalize about yourself and change every day. I’ll just wear whatever I want, and if I feel good in it then it really doesn’t [matter]. I could really care less about what anyone else says. It has never mattered to me one bit what other people’s opinions are. It’s just the way I am.”

It’s clear that no one will triumph in this age-old battle, and, in many ways, the e-girl VSCO conflict represents yin and yang, the light and the dark in the world. In the end, their morals are complimentary and they must learn to coexist.