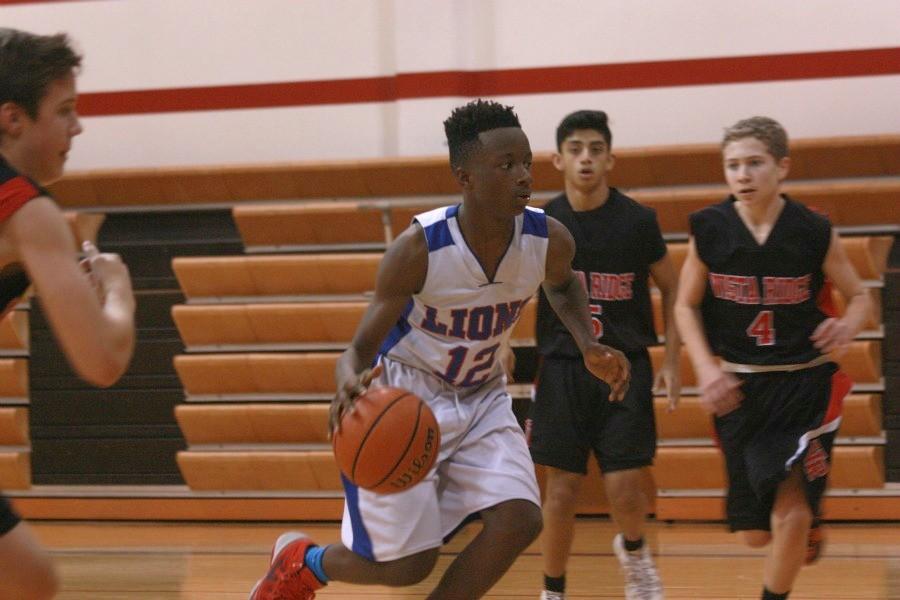 B-team player Destin Pinkey running through the Rangers to score for the Lions. The game against Vista Ridge was their second time facing the team.

As the freshmen Lions battled against the East View Patriots, each team came out with a victory.

“It was good, we had the most points we had all year and held them to the least amount of points all year,” A-team Coach Bradley Washington said. “I think it was a good effort overall on both sides of the court. We played a good solid team defense and didn’t let one kid just go off and we held them to less than 10 points each quarter so that’s always a good sign.”

The A-team came out to the court in the first quarter only to take hold of the scoreboard by earning 20 points against the Patriots. In fact, there was only one quarter of the game when the freshmen Lions didn’t earn 20 points or more. With 16 points coming from Logan Clark, 15 earned by Jake Reed, 10 each from Hunter Stevens and Kyce Wilson, nine gained by Ethan Rosenberg, seven earned by Tay Brown, and four each from Landon Sisson and Darrian Davis. With this accumulation of points earned by the Lions offense and defense alike, the game finished 75-27, Lions taking the win against the Patriots.

“I think how they have fun playing basketball,” A team Coach Bradley Washington said. ” And how they all feel really comfortable with each other and they play hard.”

Following in the A-team’s victory, the B-team fell short in the first quarter with a score of 4-8 but then were quickly able to earn 17 points in the second quarter and catch the lead. The Lions and Patriots stayed neck-in-neck as points were fetched on the Lions side with Nate Pfeifer earning nine, followed by Kobe Cavanaugh with eight, six each gained by Addison Mings, Destin Pinkey and Caleb Thompkins, Ben Townsend with four, and Brian Puckett earning two that would lead the Lions on the scoreboard to close the night with a score of 37-35, Lions taking the overall victory for the night.

“Looking back on the season, there isn’t one team that we didn’t have a great chance to beat,” B-team player Diego Segura said.  “No teams with some ridiculous height or size advantage, or that shoot 80% from the field; but what lost us the games that we did lose, was the fact that we began the game slow and sloppy. We improved throughout each and every game.”

After their victory against the Patriots, the freshmen Lions pursued after the Vista Ridge Rangers and yet again earned themselves another victory.

“It started off pretty crazy,” Coach Washington said. “It just took us a bit to get adjusted and we were up, I think we got progressively more better and comfortable. I think we’re starting to score the ball a lot better. This is the second game in a row where we had 70 plus points and so I think we’re just starting to click. They were a good team so hats off to them.”

While the Rangers were slipping by with the lead against the freshmen A-team during the first quarter with a score of 13-14, the Lions retaliated and gained the scoreboards favour as they would for the rest of the game as well. The Lions’ Sisson earned 18 points, Wilson with 11, Stevens with nine, Brown gaining eight, Ryan Amerson with seven, Clark and Reed with six each, Dasani Coffee with five, Rosenberg with three and Davis with two and with these scores, the Lions came out on top with a final score of 74-51, freshmen Lions taking the win.

“I’d say it’s just knowing the team from experience and having a bit of confidence, and it carried us to two wins,” Segura said. “The pre game mindset was a winning one.”

Similar to the A-team, the B-team advanced even more so into victory as they surpassed their previous score and maintained their lead throughout the end of each quarter with points being earned by Cavanaugh with 11 points, Pinkey gaining 10, Mings earning nine points, Pfeifer with eight, Bryce Carson with six, Townsend with four, and Puckett earning two that would allow the team to win by a final score of 48-30.

“In some of the games this year, my teammates and myself included have seen a competitive side of me that sometimes doesn’t show and it’s definitely been a great experience, which I’ll thank Coach Washington and Coach Pleasant for for a long time. We’re leaving it all on the court against Drip.”

“It might be the last time some of us put on Leander basketball jerseys,” Segura said. “I love basketball for the simple reason that it is a very simple yet complex game that brings out one of the best shows in teamwork in all of sports. Every year that I’ve played, I have learned so much and become even more appreciative of the game. We weren’t about to walk out losers.”