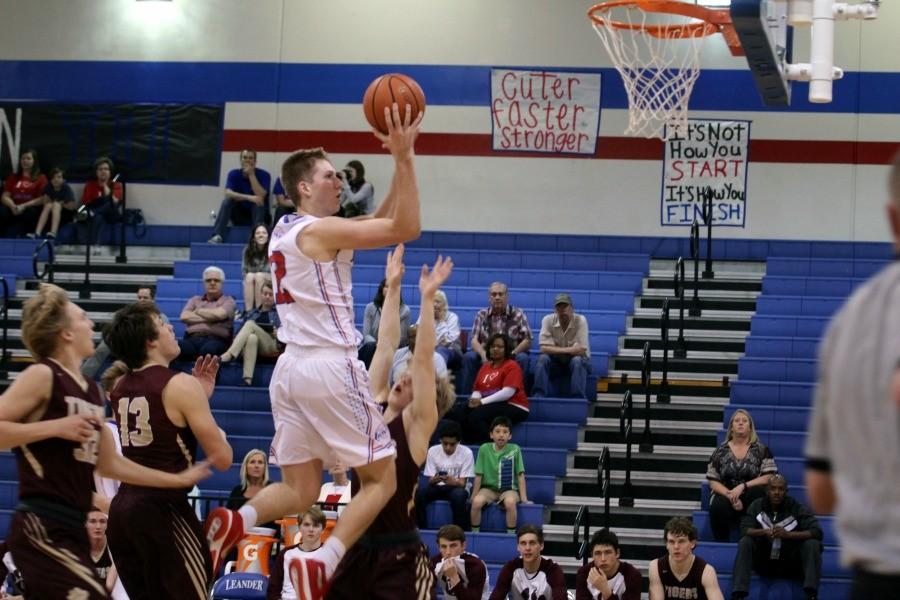 Junior Chase Cotton shooting for two against Dripping Springs. Bonner, Berry, Allen and Silva are the senior on the basketball team.

The Lions lost to Dripping Springs on senior night last night 45-47. The seniors that were honored at the game were B’jon Allen, David Bonner, Michael Berry and Pedro Silva as well as trainer Zach Patton.

“The teammates that I played with [were my favorite part],” Bonner said. “I wouldn’t have wanted to play with any other group of guys.”

The Lions led the Tigers in the first quarter 11-7, and in the second quarter 26-22. The game was mostly defensive as both offenses couldn’t score a lot of points in the beginning.

“We didn’t play our best basketball, but it was fun to come out after a tough loss against Vista, and the team really stood together, it was our last game, and the seniors just wanted to end it on a good note,” Silva said. “The final score didn’t show that, but we’re really happy with what we contributed throughout the year.”

The Lions continued to lead in the third quarter 41-37, but ultimately lost the lead after a few fouls that resulted in a Dripping Springs score. After the Tigers fouled, the Lions had one final opportunity, but it escaped them, ending the game.

“We had a rough season, and things didn’t go our way, but we had some good memories and lots of fun at times,” Bonner said.