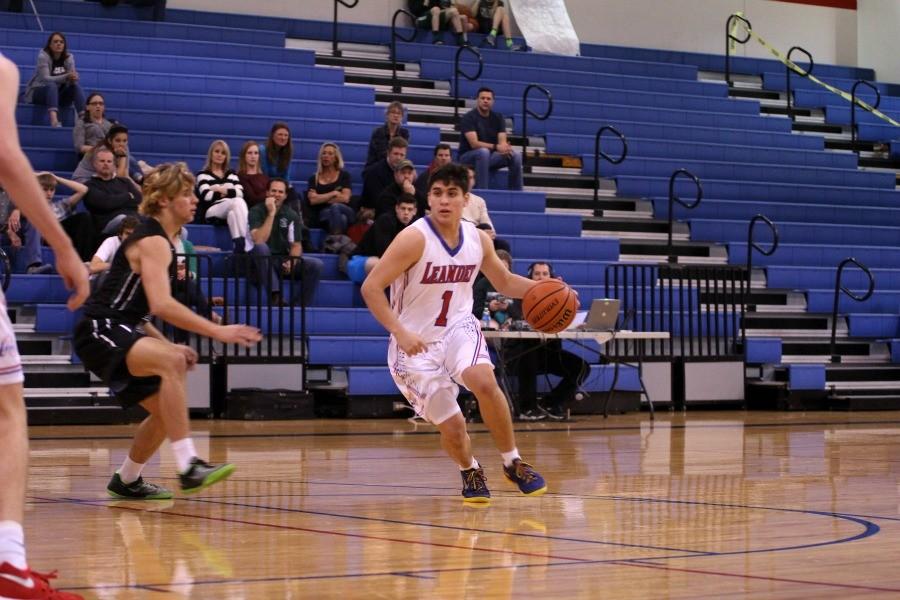 Senior Pedro Silva dribbling down against Cedar Park. The Lions scored 25 points in the first half.

by Jack Densmore and Austin Graham

The Lions faced the Cedar Park Timberwolves last Tuesday night, the Timberwolves took the win with a score of 58-46.

“When we stay focused, and locked in we can get it done and do what it takes to win,” senior David Bonner said. “We just have to keep doing it, and stay consistent and play, and we didn’t do that towards the end.”

Both teams tied in the first quarter, 11-11. In the second quarter, the Timberwolves were up just by two points. Senior David Bonner led the team with seven points in the half.

“At times we were good, but we didn’t get it done towards the end,” Bonner said. “Kind of sucks we’re in this funk right now, but we’ll just try and get out of it.”

“I did alright, but I could’ve done better,” Thompson said. “I could help my team more, and we should’ve won that game, but we’ll be better.”

Next, the Lions travel to Marble Falls to face the Mustangs as district gets closer to wrapping up.

“We just gotta get back in practice,” Thompson said. “We gotta do all of the things coach wants us to do, re-evaluating, stopping turnovers and we’ll bounce back and be ready for Marble.”

In a game with a loss by only four points, the JV boys ended Tuesday night’s game with a score of 43-47, Cedar Park up.

“​I thought we did a great job of getting some very good, open looks at the basket but just couldn’t get shots to fall,” JV coach Will McNeil said. “Also, we attacked offensively drawing fouls like we wanted but shot 40% (6-15) from the freethrow line. A little better in either category and we have a commanding lead in the fourth quarter. We played extremely well in the effort areas, defending and rebounding, which kept us close enough to have a chance at the end of the game.”

The game started out slow with the boy’s scoring a total of four points in the first quarter. Sophomore Seneca Jones sunk a three-pointer while sophomore Isaiah Gage made a free throw.

“We worked well together moving the ball well and finding the open man,” sophomore Alex Djukic said. “We should’ve played all out through the entire game instead of just the third and fourth quarter which is what cost us. We had plenty of chances to win the game, but we didn’t execute well enough. We had too many turnovers.”

The second quarter, the pace began to pick up. Sophomores Chris Jones, Joey Wancewicz and junior Kevone Graham all made baskets with Jones and Wancewicz making free throws as well. The boys scored 11 points this quarter bring their score to 15 at halftime.

“We did a good job getting into the paint, but we had way to slow of a start to the game,” Chris Jones said.

In the second half of the game, the boys scored a total of 28 points. Gage made three consecutive three pointers while junior Blane Smith scored two baskets and a free throw. Cedar Park scored 16 points in the fourth, only one point more than the boy’s.

“Our main focus was to play solid defense and to rebound them, which I think we accomplished,” Smith said. “We worked well as a team throughout and everyone did their job. When it came down to it, we had a few sloppy turnovers which cost us the game.”

The boy’s next game will be tonight against Marble Falls at their campus.