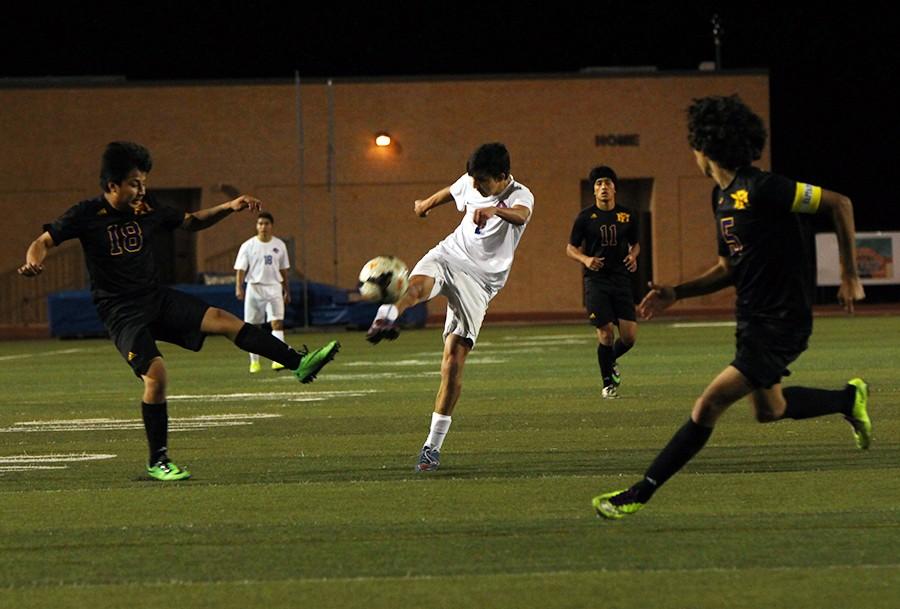 Senior Dallas Sullivan shoots the ball towards goal. He finished his last goal with a hat trick.

In the final game of the year on senior night the varsity soccer team defeated Marble Falls 3-0 at Bible.

“My favorite part of every season is always the bond the is built in the team,” Head Coach Russ Girard said. “It becomes a family. It was a struggle for us this year, but without struggle there is no progress. We grew together and were able to end the year with a 3-0 victory over Dripping Springs which I thought was impressive.”

It was senior night and seniors made the big plays of the night. Senior Dallas Sullivan scored a hattrick of three goals with two assists from senior Kali Banda and one from junior Ian Milne.

“To conclude the season and my final game ever it was amazing,” senior Dallas Sullivan said. “I’ve learned that the game isn’t a game at all. Sure you have rules and you play and there will be wins and there will be losses, but at the end of the day, whistle, season, it’s about the people you play with that make it worth playing.”

The boys finished the season with two wins against Marble Falls and Georgetown, two ties and ten losses.

“I will miss the seniors very much and I am looking forward to seeing the rest of the underclassmen step up and fill in those leadership type positions,” Girard said.