Brought down by the Patriots, Rangers 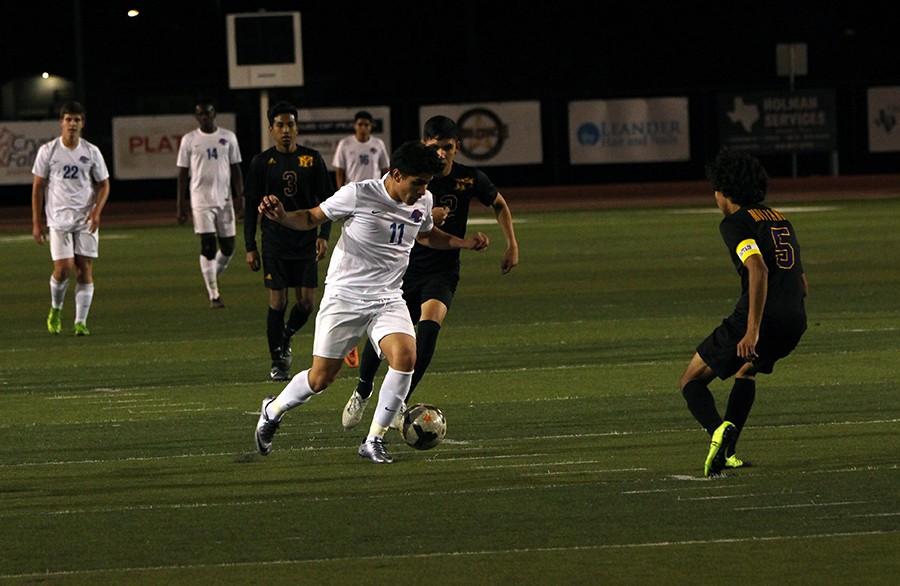 Senior Pedro Silva dribbles towards a defender. The boys tied this game 2-2.

The varsity boys soccer team lost to East View at their away game 2-0 and to Vista Ridge 2-1.

“We’ve worked hard the past weeks and have improved so it was tough to not see the results we wanted,” sophomore Kyle Vogel said. “We have one game left so we hope to end on a positive.”

For the second time of the year, the boys fell to the East View Patriots. The team went down a man in the game after a challenge in the back to give away a penalty. They converted the penalty and scored moments later. It finished with the boys down by two goals.

Next up they played against Vista Ridge at home for senior night. Senior Dallas Sullivan scored another goal but they lost 2-1.

“[Seniors] have helped us on not giving up even if we are losing 4-0, and to never put our heads down and to always go all out until the last minute,” sophomore Daniel Carrillo said. “We need to work on trying to keep the ball under control and move it around the field more and practice on finishing to score from long distance.”

Next up the team will face Dripping Springs away starting at 7:15 for their last game of the season.