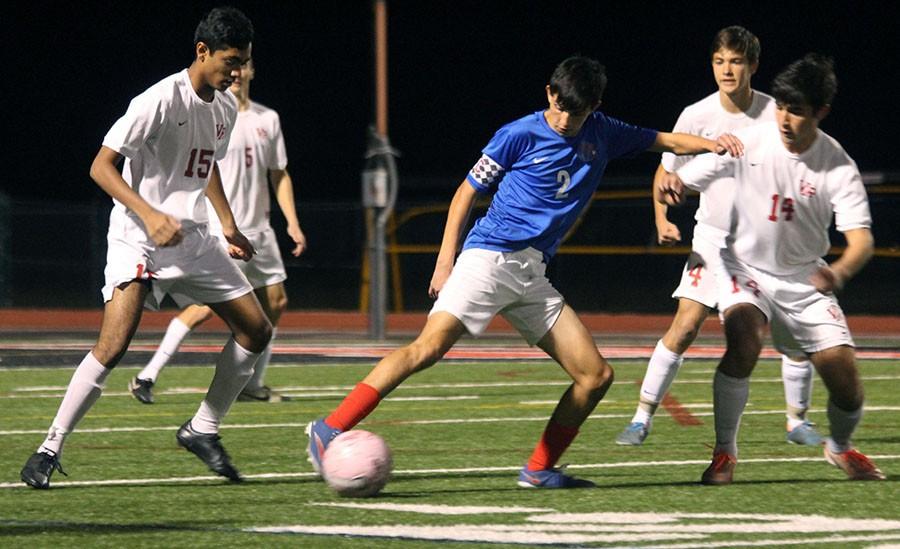 Senior Dallas Sullivan takes on Vista Ridge defenders. He was one of the assisters in the Georgetown game.

The varsity boys’ soccer team went 1-1-4 in their past five games. They defeated Georgetown but lost to Dripping Springs, Vandegrift and Cedar Park, but tied Marble Falls.

“They have a lot of fight and play very hard,” Head Coach Russ Girard said. “We are constantly improving as it is one of our goals to improve everyday. We have learned how to play in different systems with different styles based on who we are facing.”

The last game the Lions faced Cedar Park away and lost by three goals to one. This was after defeating the Georgetown Eagles on a Friday night at Bible Stadium. Freshman Reid Jimenez scored twice from midfield and senior forward Ruben Gonzalez scored the final goal in the game. Junior Ian Milne and senior Dallas Sullivan go the assists.

“It felt great honestly,” Jimenez said. “I was very surprised that I could do that. My teammates helped me because they were the ones who put in the effort to create those chances for me to score.”

The boys also lost to Vandegrift 3-0 and Dripping Springs 2-1 with freshman Ernesto Alejo scoring off of senior Chris Smith Padilla’s assist. Then they tied Marble Falls 2-2 with Sullivan scoring both goals.

“We’re nearing the end of our season and we know we have to step up our game and play with more intensity and passion so after the first couple minutes of each half we stepped up and performed,” Sullivan said.

Next up the team will play against East View away starting at 7:15.