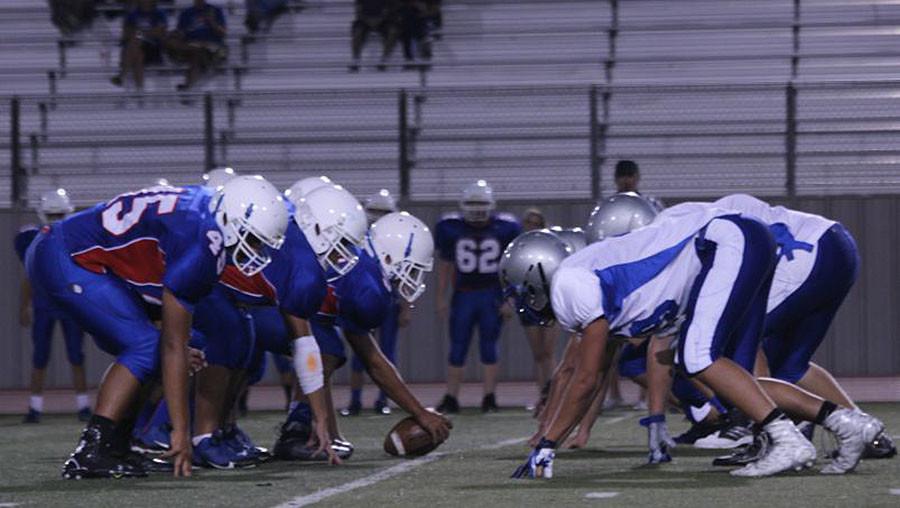 The Blue team's offense facing off against Georgetown. They later scored but were defeated with a final score of 42-7.

Both Freshmen teams struggled against the Georgetown Eagles in Bible Stadium on September 17, but not without making the first touchdown of the Red team’s season completed by wide receiver Dylan Hembey. Despite the touchdown, the freshmen lost out to the Eagles in the fourth game of the season and left the final scores to be 24-7 on the Red team, and 42-7 on the Blue team.

“Well I would say that it didn’t go as planned or as we had practiced throughout the week but we did execute some great things,” freshmen Coach Zack Weikert said. “Got a touchdown, which is a positive. The boys have been working hard on the offensive side to make that happen and to kind of see them progress and finally get one. I think is a great thing because it’s going to build confidence as we go through, but overall it was disappointing to an extent because we worked hard for this and things didn’t quite pan out the way we wanted it to. “

Starting out on offense, the Red team came out in a tired effort that lasted throughout the whole game and hung over the crowd. Even though quarterback Diego Segura threw many passes on offense, many of them were intercepted by the Eagles or weren’t able to capitalize in the red zone, and left the first quarter with a score of 7-0, Georgetown taking the first touchdown of the night. In spite of a slow start, Red team cornerback Anthony Nelson intercepted Georgetown at the 50 yard line halfway through the second quarter. However, it was in the third quarter, 3:35 remaining on the clock, when wide receiver Dylan Hembey scored the first touchdown of the season for the Red team and made the score 24-6, Georgetown still in the lead.

“It felt really good knowing that I got the first touchdown of the season so far,” Hembey said. “ I actually didn’t know if anyone was chasing me, I just kept running. I just hope everyone remembers their plays, make more touchdowns and wins these games.”

After the touchdown on the Lions’ side, the sidelines sparked up along with some from the crowd and waited in anticipation for another possible touchdown that failed to come about. With a final score of 24-7, and the Eagles flying off with a victory, the Red team’s accomplishments hardly went unnoticed and encouraged the players for future games.

Beginning on defense, the first quarter of the Blue game was delayed by 20 minutes due to an injury. Continuing on with the game, the Eagles scored early on to start off the game with a score of 7-0, but the Lions echoed back with their only touchdown of the night made by wide receiver Jake Reed near the end of the first to even out the score to 7-7. In the beginning of the second quarter, Georgetown clipped by and scored to 14-7, Eagles taking the lead back, but were met with an interception made by Ethan Rosenberg that allowed the Lions to move the ball a bit better. With a few broken passes that were caught by Georgetown, the Blue team fell short by halftime and started the third quarter with a score of 21-7. The game ended with a final score of 42-7, Georgetown taking the win.

“I mean we just have to put everything together,” freshmen Coach Adam McLain said. “We can’t play well for one quarter or two quarters, it’s gotta be four quarters of good football to beat any team in our district. We play in the toughest district in the state of Texas, so for us to have success, we have to do things right.”

The Freshmen teams will play away against the Vandegrift Vipers in Ed W. Monroe Memorial Stadium on September 24. The Red team’s game will begin at 5:30 p.m. and the Blue team’s at 7:00 p.m.